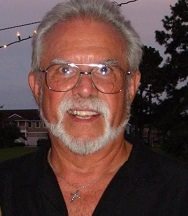 Colington- After a long, hard fight with cancer, William Thomas Marra, known to most as Tom or Tommy has left for his heavenly journey on Friday, April 14th, 2017. He was preceded in death by his parents, Beatrice Gwillam Marra and William Marra, Sr.

With his passing he leaves behind a loving wife, Karyn Schweiker-Marra and seven children between them. They include his son John Thomas “JT” Marra and wife Melanie Marra their two children Carson and Madden; his daughter Mary Beth Marra with her two children Alec and Sarah; daughter by marriage, Sabrina Rodriguez and husband Shannon Strickland with their four children; Brandon, Raven, Alex and Zander; his son by marriage, Davin Watne, his wife Diana and their two children Aliya and Adira; another son by marriage Carol “Alyosha” Schweiker and companion Sharon Brescoach. In addition, there are two daughters by marriage, Kyra Schlosser with husband Jeff Schlosser and their kids Zoe and Max, and Heather Mullens, her husband Jay Mullens and their two kids Seth and Conner and late daughter Ella Shea. Tom is also survived by his brother, John Marra.

Tom was the most loving and caring Father as well as grandfather.  He always was ready to provide an arm for snuggling, a beard to do “mush-mush” with the young grandchildren and always, had a smile on his face. Tom believed that you must readily have something cooking in the kitchen to make sure every belly was full and readily available in case you were hungry. While you were eating, he had plenty of stories to tell you, whether they were true or not, was your guess.

Tom was an elementary school teacher for physical education and science for 30 years.  He also managed to earn his pilot’s license and served his church through numerous offices.  Compassionate and caring, Tom  started a soup kitchen, coached pee wee baseball, and founded a Jolly Gymnastics team for youth in his home town of Morgantown, WV. He retired here on the Outer Banks but still taught at COA, and became an Auxiliary Chef at the Oregon Inlet station.  He greatly enjoyed feeding and  socializing with the Coast Guard.

He was a kind, patient and generous husband, always ready for any and all honey-do lists. Whether it be a goat, a cat, or a necklace, Tom always had a surprise for his bride. As the patriarch of his family, he will be missed dearly, but his family is thankful that his fight is over and he is at peace in heaven now.