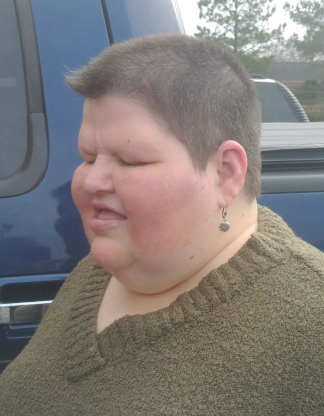 Raised in Currituck County, Sheila attended the Governor Morehead School For The Blind where she acquired specialized life skills to live successfully and happily as a blind citizen.  She thrived in Raleigh but chose to return home to graduate from Currituck High School with her peers from Griggs Elementary School. Sheila continued her
education, graduating from East Carolina University.

Eventually Sheila returned to Raleigh where she lived and worked with her friends and her loyal service dog Ginnie. Sheila was an active member of Avent Ferry United Methodist Church where she enjoyed singing in the church choir.  Sheila will be remembered for her kind heart and loving spirit.

She leaves behind her parents, Tommy and Sandra Newbern of Powells Point, NC; her very special brother, Thomas Newbern, Jr. (Kristen) also of Powells Point; her four nieces, Katin, Hannah, Anna Grace and Reagan as well as numerous other family members and friends.  She will also be dearly missed by her closest friends and housemates, Gerald Smith, Lusi Radford, and Daria Radford of the Raleigh residence.

The family will hold Sheila’s memorial service at Avent Ferry United Methodist Church in Raleigh, NC Saturday, April 20, 2019 at 11 am. Pastor Donna Thompson will officiate. In lieu of flowers, memorial donations in Sheila’s honor may be made to South Eastern Guide Dog School at 4210 77th St. East Palmetto, FL 34221.