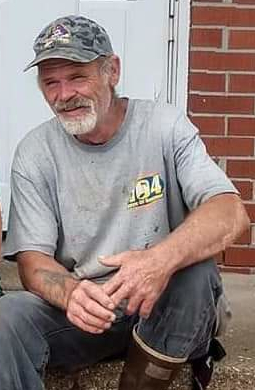 Manns Harbor- Russell Lee Miller, II or “Rusty” as he was best known, passed away at his Manns Harbor home April 30, 2022 after a courageous battle with cancer. His family surrounded him with love as he transitioned from this world.

Born in Elizabeth City, NC August 11, 1971, Rusty was raised in Colington.  As he grew, he learned the commercial fishing trade and eventually became a successful crabber. Besides working hard at his job, Rusty also worked hard to maintain his sobriety.  He was a proud member of AA and drew much comfort and strength from the Serenity Prayer. Eventually, Rusty met “the one” and fell in love. He married Ashly Burnette in 2013 and their family lived happily together in Manns Harbor.

Left to celebrate Rusty’s life is his wife, Ashly Burnette; two children Abigal Burnette and Stephen Miller all of the Manns Harbor residence; his mother, Mary Miller of Powells Point, NC; his step-mother, Gloria Miller of Manteo, NC; one brother, Chris Miller (Nellie Gibbs) of Garner, NC; one sister, Angie Sawyer of Skyco, NC; two nephews, Haley Gibbs and Brandon Gibbs also of Garner; his two aunts, Lee Swain Petty of Columbia, NC, and Nellie Sawyer of Hertford, NC; as well as a host of other loving relatives and friends.

The family will honor Rusty’s request for cremation and as he wished, the family will host a celebration of his life at the family residence in Manns Harbor Saturday, May 7, 2022 at 2 pm.  Gallop Funeral Services, Inc. was entrusted with arrangements.

Son I will love and miss you till end of my days love you . Love you,mama

Rip cuz u in no more pain...to the family sorry for your Loss..

ashley abigail& stephen, our thoughts & prayers are with you,all we loved rusty just like he was one of the family.

Mary I’m so sorry for your loss and the family. I always loved running into Rusty we would stop hug and talk a bit. Sometimes in other people’s way. Didn’t stop us. We were done I always had a smile on my face. Hands down one the most wonderful person I have the honor too known.