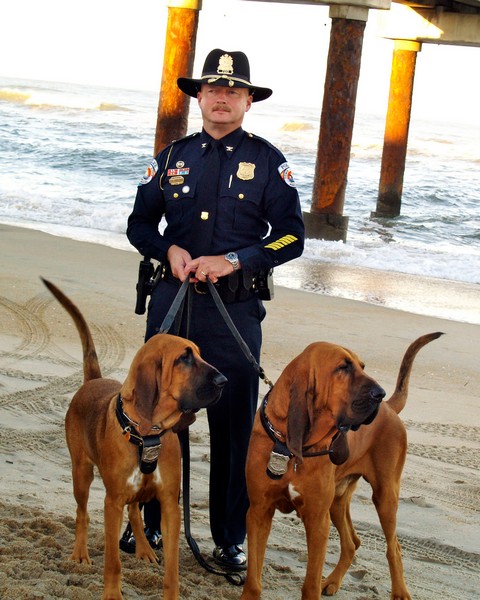 Jarvisburg – Phillip Allen Ferguson, 55, went home to be with his Lord and Savior on November 14, 2019. He was born January 22, 1964 in Lexington, Kentucky to Robert Vincent and Anita Kay Douglas Ferguson. He had a lifelong love of trains, poetry, cars, and bloodhounds. He spent his childhood wandering train tracks, making his mother crazy, and getting into one thing after another out at the Taylor Made Farm. He attended St. Paul School and graduated from Lexington Catholic High School in 1982. From there he attended Eastern Kentucky University, studying Criminal Justice.

In 1986, while working at the Marriott, Phillip met his lifelong love, Sandy. They were married in 1987 and moved to Kill Devil Hills, North Carolina shortly thereafter. On Halloween of 1988, they welcomed their only child, a daughter named Piper. In 1994, Phillip and Sandy purchased their family home in Jarvisburg and filled it with love and animals: Echo, Tuckie, and Droopy (the beloved Basset hounds); Roo and Punkinhead (the crazy cats); and various small animals that daughter Piper brought home.

Through the years, Phillip worked tirelessly for the Kill Devil Hills Police Department, then as an investigator for the Dare County Sheriff’s Office before taking a position in 2002 with the newly incorporated Town of Duck’s Police Department. He rose through the ranks of the department to become their Chief of Police, a position he held in high regard. Phillip, together with wife Sandy and daughter Piper, raised and trained working bloodhounds who also served the community with him. Chief Inspector Morse of Stirling Bridge (Morse) followed Phillip to the Duck Police Department and served with him until his untimely death in 2009. Following in those big pawprints, October’s Magic Ribbon of Stirling Bridge (Magic) and November’s Rolling Thunder of Stirling Bridge (Harley) also served beside him in the years to come. After stepping down from the Chief position in 2015, Phillip rejoined career-long friend and brother, Sheriff J. Doug Doughtie, at the Dare County Sheriff’s Office, where he faithfully served the community until his death. Joining him in that service in 2018 was Finnegan’s Wake of Stirling Bridge (Finn), his final earthly bloodhound. Upon his retirement in 2016, he finally bought his beautiful Cadillac and enjoyed a bit of time off before returning to the Dare County Sheriff’s Office part-time later that year. He never could stay away from the job and the people that he loved so dearly.

Phillip was a devoted Catholic who drew positive influences from the tenets of other religions to lead a more peaceful life. He was a regular attendee of mass at Holy Redeemer by the Sea in Kitty Hawk, North Carolina.

Anyone who knew Phillip knew at least a few things for certain: he could command a room with ease, he could tell you stories that would make you laugh until you cried, and his shining star was his daughter Piper, his pride and joy for each of her 31 years with him. He loved to tell anyone who would listen that the lawyer who was before the court was his Doodlebug as he beamed with pride. He built his loving home and his wonderful life alongside his beloved wife Sandy, with love, humor, and more than a few missteps. He fell in love with New Orleans and the French Quarter somewhat late in life, but his love of the people and the places there never wavered.

Phillip is survived by his wife of 32 years, Sandra Humphries Ferguson of the Jarvisburg residence, and one daughter, Piper Rachelle Ferguson Smith and husband Jared of Kill Devil Hills; two of his beloved hounds, Harley and Finn, cats Roo and Punkinhead, and granddogs Maggie and Daisy Mae; brother Robert Eric Ferguson of Lexington, Kentucky; sisters Catherynne (Mark) DeMoor of Nicholasville, Kentucky, Linda (Todd) Kingsland of Lexington, Kentucky, and Jane (James) Staats of Benton, Arkansas; numerous other family members; his law enforcement brothers and sisters; and many dear friends from all walks and locations in life. He was preceded in death by his parents, Robert Vincent and Anita Kay Douglas Ferguson, his maternal grandparents Arley E. and Betty Corwin Douglas, and his paternal grandparents, Arthur S. and Catherynne Adams Ferguson.

A Mass of the Resurrection will be held at Thursday November 21, 2019 at 11 am at Holy Redeemer Catholic Church in Kitty Hawk, NC. Father Bill Walsh, OSFS will officiate.  In lieu of flowers, donations in Phillip’s name may be made to, Donations to the Gary Sinise Foundation, https://www.garysinisefoundation.org/  Condolence to the family may be expressed via the online register a www.gallopfuneralservices.com.  Gallop Funeral Services, Inc. was entrusted with arrangements.