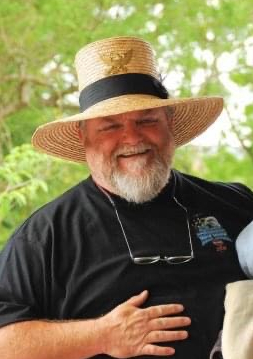 Manteo – Norwood Clinton Armstrong Jr. (well known as Dickie) was born on August 30, 1953, in Tarboro NC. He lived in Tarboro until 1970 when his family moved to Manns Harbor, NC. Dickie graduated from Manteo High School in 1971.  Soon thereafter, he married in 1975 and the union produced three children, Jeremiah, Amanda and Eliza Jo.

In his early professional life, Dickie was a first-class machinist at the NC DOT Manns Harbor Shipyard for several years.  He then transitioned to the local telephone company, currently known as Century-Link, and served as a cable locator, installer, splicer, and finally a fiber optic technician until he retired.

After official retirement, Dickie continued working- as a fuel jockey and as a night watchman at Oregon Inlet Fishing Center from 2013 to 2017. His parents, Norwood C. Armstrong Sr. (Dick) and Frances C. Armstrong both passed away, mother in 1985 and father in 2009.

Dickie enjoyed being a Civil War reenactor and portrayed both Union and Confederate troops all over the eastern US.  He was an amateur historian who loved to read!  He was passionate about history and loved to honor those who have served this great country.  Dickie competed in Cowboy Action Shooting at the Outer Banks Gun Club.  He made many life-long friends over the years. He had a great love for history, music, good books, genealogy, travel and conversation with friends and strangers alike.

Tragically, his life was taken December 27, 2021, but Dickie is now reunited with all his loved ones in heaven. Left to honor Dickie’s name and memory are his sister, Tina O’Neal (husband Kit O’Neal & nephew Taz O’Neal); his three children, son- Jeremiah C. Armstrong (wife Laurie, grandchildren, Emily, Whitney, and Russell); his daughter- M. Amanda Armstrong; and his daughter, Eliza Jo Kitchens (husband Kenneth and grandson Lance). A memorial gathering will be planned in the spring of 2022.

Dickie’s family would like to offer special thanks to Hubby Bliven, Charles Minton, and Gaston Midgett for their friendship, care, and assistance over many years.  His family would like to also honor Michael Berry by reminding us, “Greater love hath no man than this, that a man lay down his life for his friends.” John 15:13 KJV. Please share condolences to the family and check for service details at www.gallopfuneralservices.com.  Gallop Funeral Services, Inc. was entrusted with arrangements.

My deepest sympathy to your family. Dickie was a great person,an excellent civil war historian. He will be missed by so many. He truly touched alot of folks. I will miss his hellos.

We are so very very sorry for your loss....Michael was not just our employee but family to us and your tribute to him was beautiful....May you all hang tight to your memories and know you will see each other again!

Such a shock! I will always remember Dickie for hitting me up for NY boiled peanuts at Ft. Branch.

Tina and family, You all are in my heartfelt thoughts and prayers. Your brother was well loved and lived a good life doing the things he loved. I'm sorry that ended too soon. Cherish your many happier memories. I pray God's peace will surround you all in the days and moments ahead. With love and deepest sympathy, Janice

Tina, So very sorry for the loss of your brother. Thinking of you. Edna

Prayers for Dickie’s family! I am absolutely heartbroken! I was a re-enactor with Dickie and he was a dear friend! RIP Dickie!

One less "man of iron"! A true friend whose heart many times overruled his better judgement.

Heartfelt condolences to Dickie's family. I was fortunate to know Dickie for many years. We shared an interest in history and books. Whenever we met -at the library, thrift shop, grocery store etc.- he always had a ready hello and a positive thought. Even when he was in physical pain. He was a good man and will be missed.

My deepest condolences to Dickie's family and friends. I met Dickie many years ago when I first started shooting Cowboy Action at the OBX Gun Club. One of my fondest memories was the day he welcomed my grandsons and myself at our first match. As we set up for a group picture, I remember Dickie rounding up my two grandsons so they could be in the picture also. This is something that will stay with me forever. Bobby aka Kidd AtHeart Newport News, VA

There are no words to ease the pain of such a loss but, holding onto and sharing all the good times will ease that pain and allow him to live on when you share those memories with others.

Tina, I was so sorry to hear about Dickie. I know that this has to be very painful for you. I will keep you in my heart as you deal with this awful situation.

Fond memories of Dickie when we worked together at the Manns Harbor State Shipyard - remember the time he asked if Jeremiah could use my cadillac for the prom, and knowing he would make sure he would not do anything crazy, we let him use it, and he enjoyed the evening. So sad he lost his life in such a tragic way. Our thoughts and prayers to everyone in the family. Rosemarie & Steve

George and I for your loss and will continue to pray for God’s comfort to surround all of you. I met Dickie, aka Rebel Red, when I started shooting Cowboy Action at the OBX Gun Club. He was always encouraging. He used to print out certificates for top shooters and such. I was never good enough to earn a certificate, but Dickie took care of that. He gave me a certificate for being in the top ten shooters(there were only ten) and one for First Place Lady Shooter ( I was the only lady at the time!). He just didn’t want me to be left out. That’s a special memory of a caring friend.

Sincere sympathies to Dickie's family in your great loss and that he was so senselessly taken from you. May your memories of his goodness bring you comfort.

I was so sad to hear of Dickies passing. I hadn't seen him since I moved to Hatteras, then to Currituck but he was all smiles and friendliness when I would run into him. I will miss him. My heartfelt condolences to Jeremiah, Amanda, and Eliza. My prayers will be with you.