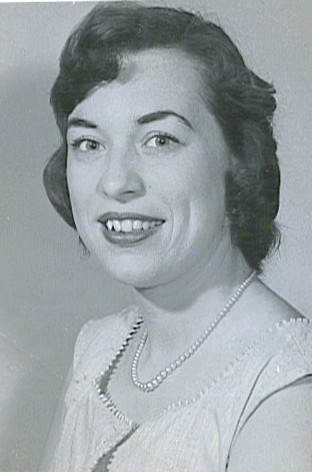 Kill Devil Hills – Margaret Ann Giles Buchanan was born on October 10, 1936 to Barbara Hastings and Merle Lewis Giles.  She was the second child – her brother, Russell was 3 years older – and the family called her Peggy or Peg.  Peggy grew up in Teaneck, New Jersey and Blauvelt, New York.

Peggy graduated from Cornell University in 1958 with a BA in home economics and elementary education.  She was a member of Chi Omega sorority and served as president her senior year.  At Cornell Peg met Ronald L. Buchanan, a veterinary student, and they were married on June 14, 1958.  Earlier that year Peggy was baptized into the Church of Jesus Christ of Latter-Day Saints.

Peg and Ron moved to Maryland and soon started a family.  Douglas was born in 1959, followed by Deborah in 1960, and Holly in 1961.  Peg kept busy running a household, looking after three small children, and helping Ron manage his veterinary practice.  Two more children completed the family – Scott, born in 1965, and Elizabeth (Betsy), born in 1969.

One of Peg’s great interests was genealogy work, and she spent many hours at the genealogy library researching her ancestors.  Peg was also an accomplished homemaker and excelled at needlework, quilting, knitting, sewing, rug-braiding and more.  She was an excellent baker and her homemade bread was much sought after at school and PTA fundraisers.  In the opinion of her family, nobody made a better pie crust than Peggy.

In 1970 Peg became a licensed real estate and soon excelled in her new career.   She was a top agent for over 30 years.  In addition to selling real estate, Peg began investing in real estate.  At her peak, Peggy was invested in over 30 rental properties, which she managed; some she and Ron owned outright, and others she owned jointly with one or two other agents.

Music and singing were a major source of happiness in Peggy’s life.  She had a beautiful voice with a large range, singing both soprano and alto.  In the early ‘80’s she joined a community choir at the University of Maryland and sang with the choir for twenty years. Peg enjoyed singing the choral masterpieces – Beethoven’s 9th Symphony, Mozart’s Requiem, Verdi’s Requiem, numerous oratorios by Handel including Messiah, and many others.  She travelled with the choir and sang in Berlin, Moscow, London, Belgium, Switzerland, and Puerto Rico.  One of the highlights of her time with the choir was singing at Pres. Reagan’s second inauguration in 1985.

Peg is survived by her husband of 59 years, Ronald L Buchanan, and four of her children, Douglas, Deborah, Holly, and Elizabeth. Scott predeceased her earlier this year.  She is also survived by 13 grandchildren, and 8 great-grandchildren.  We know that she has been happily reunited with her parents, her brother, her son Scott, and the many ancestors she discovered through her genealogical research.  We look forward to the day of resurrection when she and those who have passed before us will live again with our Savior.  We pray that we will be worthy to join them and await that day with joyful anticipation.

The funeral will be held 11am, Friday, August 11, 2017 at The Church of Jesus Christ of Latter-day Saints in Nags Head with the burial to follow at Manteo Cemetery. The family will receive friends one hour prior to the funeral.