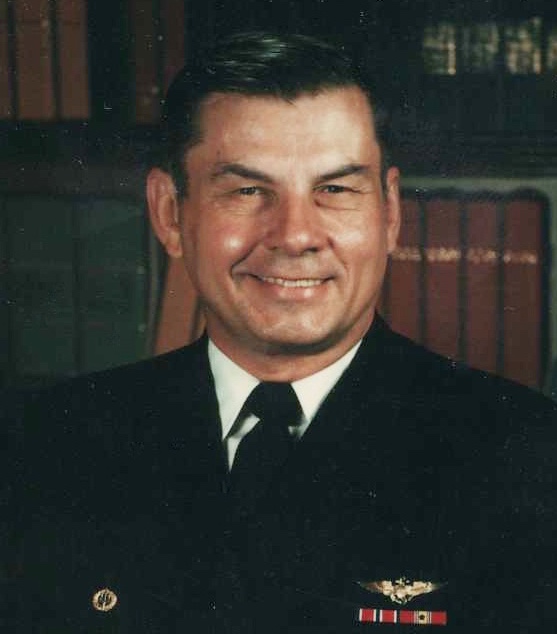 Captain Joseph J. Walter USN (Ret.) died of cancer on March 8, 2016.  He was eighty-two years old. A native of Milwaukee WI, Joe graduated from Marquette University High School in 1951 and received a congressional appointment to the United States Naval Academy at Annapolis, MD. Joe became an ardent sailing enthusiast as soon as he caught his first glimpse of the Severn, sailing through most academics and graduated with the Class of 1955 as a member of the 7th Company.  Upon graduation he served as a special assistant to the Commandant before setting sail to Pensacola to become a fighter pilot.

After receiving his wings in 1957, he was assigned to VF-41 initially flying the F2H Banshee and then the F3H Demon aboard the USS Intrepid and USS Independence. After obtaining a degree in Aeronautical Engineering from the US Naval Postgraduate School, Joe attended Princeton University receiving his Masters Degree in Aerospace Engineering with the Class of 1963. He returned to the East Coast in VF-103, flying F-8 Crusaders aboard USS Forrestal and subsequently in F-4 Phantoms aboard USS Saratoga. After a tour as an Instructor Pilot in VF-101 in Key West, Joe and family (now with seven children in tow) reported to the Fuehrungs Akadamie der Bundeswehr in Hamburg Germany. While a Naval staff officer exchange student there, he was personally designated as a Command Pilot by the Chief of the German Air Force, the first non-German ever to do so. Joe then reported to McDonnell Douglas in St. Louis as Commanding Officer Government Plant Representative Office, with additional duties as Assistant Project Manager of the Harpoon Missile Program. His next challenge was three years in Washington as Assistant Project Manager for Engineering of the F-14 Tomcat Aircraft Program. Joe was responsible for the design, flight test and fleet introduction of this controversial plane made famous by the Tom Cruise movie “Top Gun”. His next assignment was as Assistant Chief of Staff for Aircraft Material and Engineering of the Naval Air Force Atlantic Fleet Command in Norfolk, VA. Joe’s last tour was as Commanding Officer of the Naval Aviation Depot Pensacola, where he turned a troubled installation into one of the Navy’s most productive. While in Pensacola, he was recognized for unique contributions and innovative management, and was selected as the West Florida Industrial Leader of the Year 1980. In 1981, President Jimmy Carter recognized Joe for his “Special Emphasis Program” which assisted severely handicapped and mentally impaired persons through meaningful employment at the Aviation Depot. He was awarded First Place Winner as the National Employer of the Year by the US Association for Retarded Citizens. Upon retirement from the US Navy in 1982, he was awarded the Legion of Merit.

Joe sailed his boat Spica to New York to start a second career at Grumman Aerospace. Within six months he was appointed President and Chief Operating Officer of the Grumman St. Augustine Corp in Florida. He was then the youngest President in Grumman history, and he grew this small division to 1,500 employees performing repair and modification on complex military and civilian aircraft. In 1986, the Assistant US Secretary of Defense presented him the Pro-Patria Award for support of the Reserves and the National Guard. Florida Governor Martinez proclaimed Joe as the 1988 Industry Leader and Florida Industry Appreciation Award Winner. He served on the boards of three Florida universities and as a director of First Union Bank of Florida.

Joe and Genie, his loving wife of sixty years, retired to Dare County, NC where Joe was active in regional planning, civic, and charitable organizations. In their fourteen years together in Southern Shores, Joe and Genie enjoyed the company of many new friends, visits from old shipmates, and wonderful times with their children, grandchildren and great-grandchildren. Joe is survived by dear wife Genie; sons Mike, Joe, Bill; daughters Jeannie, Carol, JoAnn, Kathleen; thirteen grandchildren, four great-grandchildren; and siblings Fred, Tom and Barbara. He is preceded in death by brother Bill and brother-in-law Bill

Services are to be held at Holy Redeemer by the Sea, on March 18 at 11:00 am. Interment at Arlington National Cemetery will be held at a later date. Donations to the Navy-Marine Corps Relief Society (www.nmcrs.org) are requested in lieu of flowers. Expressions of sympathy are welcome on the on-line register at www.gallopfuneralservices.com. Gallop Funeral Services was entrusted with arrangements.