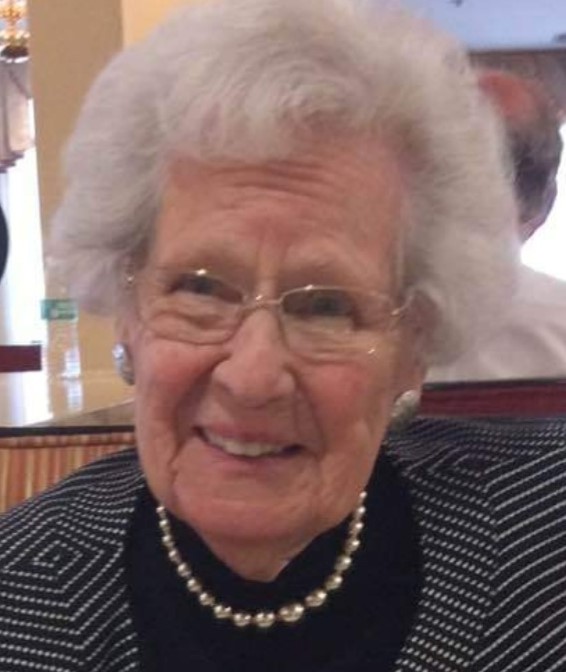 In addition to rearing four daughters, Fran volunteered with the local hospital auxiliary and was an active member of the Market Street Presbyterian Church and League of Women Voters. The family moved to London, England in 1966 where she was involved in the American School in London and the American Women’s Club. There, she continued to study art and painting. Fran was the ultimate hostess and loved to entertain. She became an expert on British Monumental Brasses and amassed an impressive collection of brass rubbings.

The family returned to the United States to the Washington DC area where she continued studying art, painting, traveling and playing golf. In 1987, Fran retired with her husband to Pinehurst, North Carolina where she was active in her church, garden club and the Pinehurst Golf and Country Club. In 2005, she moved with her husband to Fredericksburg, Virginia to be closer to family. Fran moved to the Outer Banks of North Carolina in 2020.

Fran is survived by four daughters, eight grandchildren and thirteen great-grandchildren.
Her directives for cremation will be honored and her remains will be laid to rest at a later date beside her husband in Lima, Ohio. In lieu of flowers the family invites you to raise a glass in celebration of Fran’s life.

Please share memories and condolences with the family at www.gallopfuneralservices.com. Gallop Funeral Services, Inc. was entrusted with arrangements.

Aunt Fran was greatly loved and will be missed by many! I knew I could always talk to her at any time about certain things. You, Deb, Diane, Betsy, and Laura were so very fortunate to have her for your mother. My sympathy, prayers, and hugs are with you as you learn to get used to not having her in your life. She won’t be with you physically, but you will always have the wonderful memories of her in your hearts! Love you, dear cousins, Phyllis

I am so sorry to hear of your dear mothers passing. She was such a joy and so knowledgeable. I loved her and hearing her many stories during her time at Chancellor Village. There is for sure a star that shines brighter tonight✨Sending my love and prayers for the coming days 🙏🤗

I met Fran at our Red Hat group in Fredericksburg. She was the classiest lady, wore the most beautiful clothes and always had a smile on her face and a kind word for everyone. We once had our meeting at her place of residence and she took great joy in showing her beautuful artwork and the stories of her life. We were all saddened when she was no longer able to join us. We missed her. Condolences to her children and all who knew and loved her. Our lives were enriched by her presence. I'll be sure to raise a glass in honor of Fran at our next Red Hat gathering.

Can't believe you are gone my next door neighbor and friend! We are so lucky to have our "Fran" stories to tell and I consider myself especially lucky to know and love her. Our whole family is missing her already.

Sincere sympathy to family and friends. I will always remember Fran for her loving friendship and her outstanding talent as an artist. Mary Ann Hackbarth

I have such great and fun memories of Fran. We were neighbors and friends for 10 years. I am lucky to have one of her paintings which I will always cherish.

A Chancellor Village friend. Fran one of the most liked person in my life. Loved her. Some of us lifted a glass of Crown Royal in a toast. Didnt have a flask like hers. What a wonderful lady.

Fran was a wonderful lady and always smiling and in a good mood! I always enjoyed her company at our Red Hat Luncheons. She will be a beautiful Angel watching over us. My prayers and sympathy to her family and loved ones!

I am so sad to learn of your mom's death. You have my deepest sympathy. I have so many fond memories of our time together on Walnut Court. Your mom threw some great Christmas parties. I will always treasure and think of your mom when I look at the brass rubbing of the English knight she made for me. I am so sorry for your loss. Love, Bev

Our deepest condolences, praying for peace and strength for this time, sending all our love to you Betsy and also to your family.