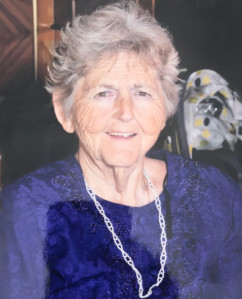 Manteo – Elma Carole Twiford Twyne, also known as Nanny to her grandchildren, received her angel wings early morning on June 26, 2018.  She was born on a sunny morning in Atlantic City, New Jersey on August 15, 1940. Her family then moved to Manns Harbor, where she spent her childhood, until she met her husband and moved to Manteo. Nanny was greeted in heaven by her mother, father, late husband Alton “Mcadoo” Twyne, her son Alton “Mcadoo” Twyne Jr., two sisters, and granddaughter Desiree Mcmurran.

As a teenager she worked in The Casino running her favorite game, Bingo. She then got married to Alton “Mcadoo” Twyne and had three children. She worked and then retired from the Dare County Sheriff’s department as the first 911 operator and the personal secretary for the Sheriff, Burt Austin. She was devoted to her Church and loved being involved in craft shows.

She was secretary to multiple pastors at Roanoke Island Baptist Church. She devoted her time to running the church van ministry, and vacation bible school. She also was very passionate about making sure those she met in her life, and those in her community, knew what it was like to feel God’s love.

The family are welcoming those to join them and will have a viewing 7-9pm Friday night June 29, 2018 At Gallop funeral home and a funeral service Saturday June 30th held at Still Waters Baptist Church in Nags Head NC at 2pm, followed by a committal at Mt. Carmel United Methodist church in Manns Harbor NC.