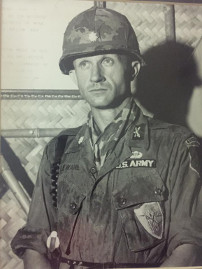 Born in New Jersey as the only child of Doctor Sigmond S. MD and Mrs. Estelle G. Lewane. He is predeceased by his beloved wife of 55 years Sara Sue (Sally) McMillan Lewane.

Lee Lewane transferred from public high school to Columbia Military Academy in Tennessee where he won his first laurels by winning the Annual Declamation Contest.

On 9 September 1946, Lewane matriculated to Virginia Military Institute. At VMI he rode in the horse cavalry troop and won his varsity letter as a midfielder on the first VMI lacrosse team.

On 13 June 1950 he graduated from VMI with a BS Degree in pre-medicine and a Regular Army commission in the armored cavalry. Lee’s first assignment was a tank platoon leader in the 3rd Armored Cavalry Regiment at Fort Meade, Maryland.  Within a year, he was on orders to the Korean war serving first in 1952 as a tank platoon leader in the 2nd Infantry Division, then in 1953 as a tank company commander in the 3rd Infantry Division.

In 1955, he was posted as a tank company commander in the 509th Tank Battalion a.k.a 9th Calvary at Fort Knox, Kentucky where he met, courted and married Sara Sue McMillan on 7 April 1956 at the post chapel in a military wedding that would continue for some 55 years. By the summer of that year, Lee and Sally arrived in the Bavarian city of Regensburg only to be separated when Lee was ordered to the Czechoslovakian-West German border during the Suez crisis and the Hungarian Uprising of 1956 as an armored Calvary company commander in the 6th Calvary and later in the 11th Calvary.  Returning stateside to VMI in 1959, Lee and Sally were blessed in 1960 with the birth of twins Catherine Sue and Victoria Ann on 17 August. In addition, the youngest daughter, Gloria Leigh, was born in 1964. Soon after Lee was deployed to Vietnam in 1965. First, as an operations staff officer in Saigon then as commander of the 1st Squadron 4th Calvary in the legendary 1st “Big Red One” Infantry Division.  The squadron fought three fierce battles in 1966 and was decorated with US Presidential Unit Citation for extraordinary heroism.

Upon his return to the states, Lee, in preparation for duty in the Pentagon in the Joint Chiefs of Staff was selected to attend the Air War College at Maxwell Airforce Base in Montgomery, Alabama and was conferred with an MA degree in International Affairs from George Washington University and a MS Degree in Political Science from Auburn University.

In 1972, Lee and Sally returned to West Germany as Commander and First Lady of the 1st Brigade of the 1st Armored Division followed by an assignment as Chief of Staff, US Army, Berlin until 1974.  Lewane’s terminal assignment was at Fort Monroe, Virginia with the Training and Doctrine Command as Director of the development of the M1 Abrams Tank and the Bradley Infantry Fighting Vehicle.  Upon withdrawing from active Army service in 1976, Lewane taught history and government at Blue Ridge Community College near Staunton, Virginia for 28 years.

Among his military decorations, they include two Silver Stars, two Bronze Stars, two Legions of Merit, a Distinguished Flying Cross for Valor and eleven Air Medals.

Friends and family may view at the Gallop Chapel Nags Head MP 16 Friday January 13, 2017 from 6 pm to 8 pm. Col. Lewane will be laid to rest in Arlington National Cemetery at a date to be determined.