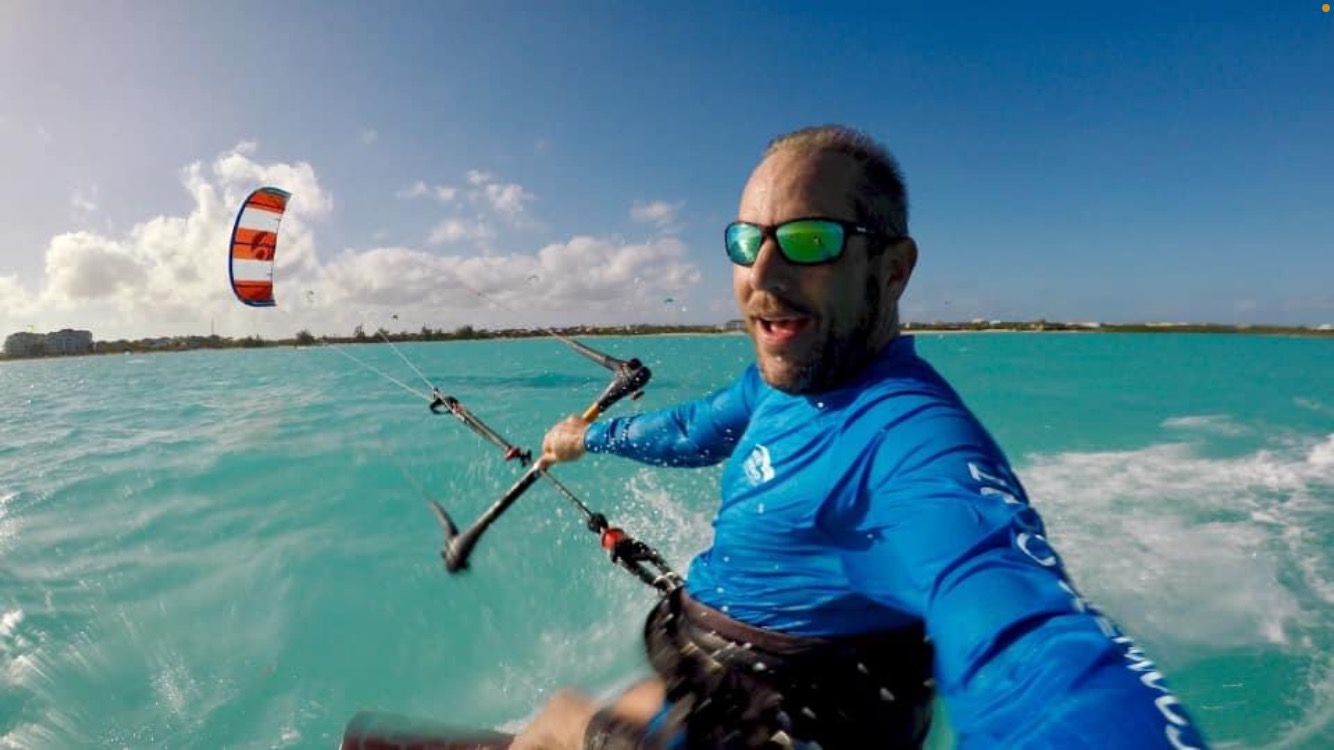 Ardent, world travelling, and loving, Charles was a passionate father, videographer and photographer, firefighter for the Kill Devil Hills Fire Department, world traveler, and avid kiteboarder. Everything for Charles led back to the water with his kite. As much as he loved the water, the mountains were also a special place for Charles. He grew up on Beech Mountain, NC and had many skiing adventures in the Appalachian Mountains as well as across the globe.

More than anything, Charles loved his children Stephanie and Griffin.

Charles co-produced a top-selling kiteboarding instructional video, “The Way to Fly”, that is still being sold today. He also created numerous brand and product promotional videos for many kite companies throughout his career and travelled the world doing so. He had a knack for directing a scene that made it all seem so easy for his subjects. His photography skills were legendary, and his images have graced the pages of more than a few publications and magazines.

Charles was a dedicated member of the Kill Devil Hills Fire Department. He previously served as a volunteer firefighter from January 2012 and rejoined as a support member on October 6th, 2020. Charles was selected by his fellow firefighters as “Rookie of the Year” in 2020, which was an incredible honor to him. He was the fire departments resident photographer and licensed drone operator. Charles got his FAA UAS Commercial Drone Pilot’s certification on November 3rd, 2020.

In lieu of flowers, an education fund is being created for Griffin Ash and donation details will be made available.

A special Thank You to the Kill Devil Hills Fire Department, which was a special community for Charles. Please express condolences to the family via the online register at www.gallopfuneralservices.com. Gallop Funeral Services, Inc. was entrusted with arrangements.

One of my favorite people ever. We always had so much fun together. So many awesome kite sessions. Loved riding in his sweet ride during hurricanes to take pictures and see what was going on. The craziest kite session of my life was the day after hurricane Sandy. Wind was 45-60 mph and Charles was grinning ear to ear the entire time helping us out and taking pics. So many great times and memories together. I'll miss you forever. Gone but not forgotten. Til we meet again. RIP Chuck. I love you ❤

“ Chuck and I knew each other for over 20 years and we always talked about the crazy things we’ve done together especially shooting photos and videos for kiteboarding. He was not only an amazing photographer but a good friend and a good person that was always here for you. But most of all, he was always about family and how much he cared about his kids. No matter where I am, your spirit will always be around me. I’m gonna miss you my friend. LOVE YOU.”

So sorry for your loss and everyone in the kite community. Charles was so passionate about kiteboarding and making videos. He will be missed. Please let us know if we can help in any way.

To his family, children and his Kiteboarding and Skiing families I can't express enough how sorry I am for your loss. Chuckle or Chuckster as I called him was always one of my best friends I have made while living on the Outer Banks. My wife and I have not spent time with him as life took us in separate directions since working together. All I can think of is his super kind inviting perspective on life and his passion to do anything cool, adventurous or even sometimes a little crazy. You will be missed by so many and so many will cherish the day we get to see that crazy smile again. Smooth winds and fresh powder my brother 🤙

Melanie & I sending our love. So sorry to hear this terrible news

So sorry for your loss. 🙏 for the entire family.

I am so saddened to hear of the passing of Chuck Ash. Chuck and my son Steve Wilson (in heaven) skied every day on Beech Mountain. They were the power kids, remarkable skiers. He and Steve both had a zest for anything outside, they were great friends. My heart goes out to his Mom Judy and sisters and family. May you find comfort in the wonderful memories of him. Rest In Peace Chuck Ash

We are sending our heartfelt prayers and condolences to the entire family. Bruce, Eva and Rebecca Jone Beech Mountain

My thoughts are with you, in this trying time. Chuck was an extension of our marketing team at Surf or Sound Realty. He brought images to life, making our guests' experiences a reality. He was a true giver in so many ways. Always laughing and telling stories that were filled with such incredible spirit. He will be missed greatly and we treasure all of the memories remembering him so fondly. His spirit continues all around us on Hatteras Island and in the communities in which he served. We will continue to recall him in so many fond ways so that his spirit will continue to grace us. If there is anything that we can do to support you, please don't hesitate to reach out to me or anyone at Surf or Sound Realty. We loved Chuck so much.

I know Chucky death is a shook. My family extends out prayers and thoughts to Chucky’s family. I know he lived to the fullest.

So sorry to hear of Chuck's passing. Will miss that mischievous smile and his unquenchable zest for life!

We are soo very sorry to hear of Chucks’ passing. Our thoughts, prayers and love are sure with you all. Robin and David

Charles “Chucky” Ash you will be missed and forever loved. Charles was my life long friend, roommate, and co worker. We shared countless adventures, creating amazing videos together, and shared a bond that bound us like brothers. I would like for others to remember the following about Charles and find peace in this thoughts: His laugh was contagious and could be instantly identified. He never spoke poorly about anyone and always found the most positive attributes in any person and situation. He loved adventure and embraced any opportunity to experience the thrill of pushing life to the limits His love of videography was fueled by his desire to share with others not only talented athletes but also turning regular people into heroes of their own story! I love you with all my heart Chucky and will cherish the memories we shared! You helped unlock the fullness of life by being part of my journey.

Chuck, words can not describe what I feel in my ❤️. It was a blessing to know you and your zest for life. You will never be forgotten my dear friend. Rest in Heaven with our Lord and Savior. Till we meet again, Love always, Pixie