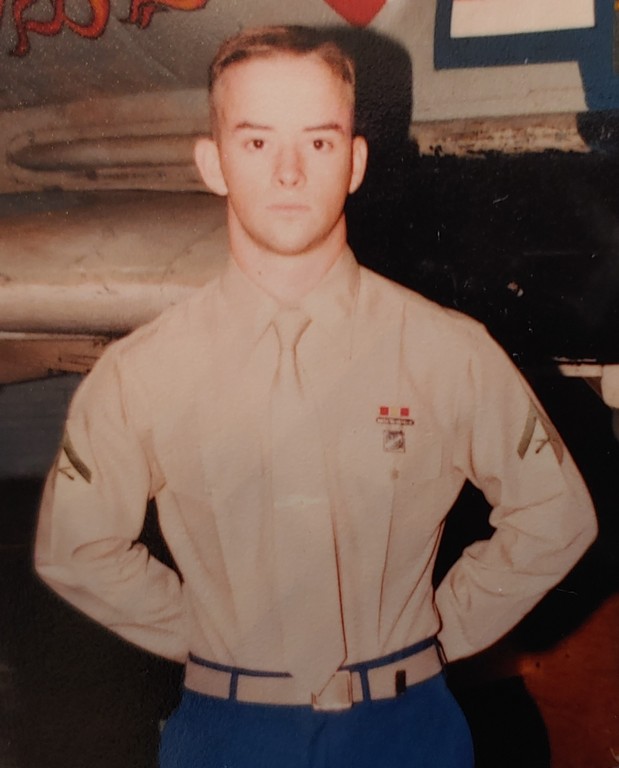 Ben Simpson, age 45, died Tuesday, November 16, 2021. Ben grew up in Chesapeake, VA, but chose to make Currituck his home. Ben spent four years in the Marine Corps. He married his special girl, Selena, and they had a son, Noah, who was the most important thing in his life.

Ben was an active part of the youth sports program and was known to many as Coach Ben. He was a talented mechanic who could fix anything. He owned Simpson & Son Mechanical.

Ben is survived by his ex-wife, Selena; his precious son, Noah Simpson; his parents, Claude and Beverly Simpson of Grandy; his brother, Joseph Simpson (Stacie) of Grandy; and his sister, Jeannie DeLeo (Rob) of Cary, NC.

Burial will be private with a memorial to be held at a later date.  Expressions of sympathy and comfort may be shared via the on-line register at gallopfuneralservices.com. Gallop Funeral Services, Inc was entrusted with arrangements.

We are thinking of all of you during this most difficult time. Our prayers are for God's comfort & peace to surround each and everyone of Ben's precious family. Peace with Love, Darlene & Doug Sells

Our deepest condolences to Selena, Noah, Joe n the rest of the family. Ben was always willing to lend a hand when in need. He loved kids n watching Noah play sports. God speed Ben.

Prayers for comfort and healing to all who love Ben. We’ve lost a good friend and will miss him terribly. Mary Suman, Jamie & Lexi Martine

We are sending our love and prayers to Bens Family especially his son Noah. Rest easy in the hands of god my friend!

We are so sorry to hear of Ben’s passing. He was always so caring and kind. Prayers for the family.

I am so sorry for your loss.

My heart goes out to Ben's family. He was my best friend in high school. I have so many fond memories and tons of great stories about our antics. My condolences to Selena, Noah, and the rest of his family. -Semper Fidelis Old Friend

So sorry to hear of your son’s passing. We had never met him but our prayers go out to you and your family at this sad time in your life. Praying for you both ! 🙏🏻🙏🏻

Am so sorry to learn of your loss. Please know my thoughts and prayers are with you during this difficult time. I know Ben is going to be missed by all but will not be forgotten.

Ben was a very talented person who will be missed.Prayers to the family and friends.

Hugs & Prayers in the coming days, may you find peace. My heart breaks for your family.

Very sorry to hear of this loss. Ben & I served together, and attended training in Memphis & down at Cherry point. A better and more giving friend I have never known. I was blessed to be able to make a trip or three home with Ben & meet some of your family...around 1996 as I recall. I know this has left a big hole...a big heart will do that. Ben, I love you Brother. Semper Fi.

We are deeply sorry about your loss. You are in our prayers. "If the Army and Navy ever look on heaven scenes they will find the streets are guarded by the United States Marines'. In our prayers. God bless.

Our deepest condolences to Selena and Noah. Ben touched so many of our youth, and we were lucky to have known him. Lisa and Tanner McNeal

Selena, I am so sorry for your loss and to everyone feeling the pain from this. Our hearts feel their capacity to love and care when it hurts so much losing someone. George and I send our prayers to you and Noah.

I was a friend of Ben's. My son Justin Fisher and I would often have times together at his new built home in Currituck and Ben would have me laughing so hard I'd leave with a belly ache. Ben also did some late night work on my AC unit when it went out and my first wife "Sally" was bed ridden - he was always there when I needed him. My heart felt condolences for the family - he'll be missed!

We are sorry to hear of Ben's passing. You are in our thoughts and prayers.

Our sincere condolences to Ben’s family and friends. May God grant you peace and comfort. He was a good man and will be missed by many.

I was so sorry to hear about Ben's passing. He was a good friend for many years. My prayers go out to his family, I hope they find comfort knowing he is now with his Lord and Savior. He may be gone from this world but he will never be forgot.

We were so sorry to hear about Coach Ben. He will always be Coach Ben to us and especially to Sam. He taught Sam so so much not only soccer but discipline and respect and much more. Our thoughts and prayers are with you Selena and Noah and your family. Rest in peace Coach Ben and know that you were loved by many. ❤😥