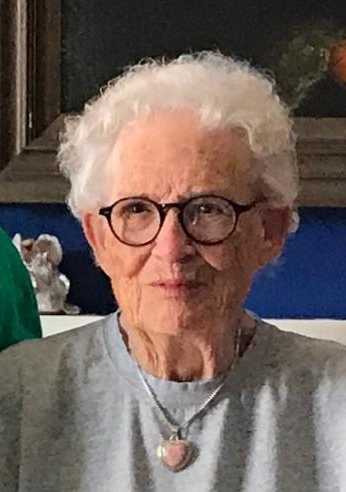 Anne Skinner McMullan died on Monday, May 23, in Nags Head, North Carolina, at the admirable age of 93.  Born in Edenton, North Carolina, on April 23, 1929, to Philip Sidney McMullan and Annie Elizabeth Williams McMullan, she was raised in that small town to emulate both her parents in the best of ways.  In high school she volunteered at the local library and was a stringer for the local newspaper.

She graduated with an associate degree from St. Mary’s School in Raleigh in 1949, a Bachelor of Arts in English from Duke University in 1951, and a Master of Library Science from Simmons College, Boston, in 1952. She began her career as a librarian in Wilson and Greenville, North Carolina, before marrying Allen Jones, Jr., and moving to Knoxville, Tennessee.  After the family moved to Columbia, South Carolina, in 1965, she was active at St. John’s Episcopal Church, including leadership in the Episcopal Church Women.  She also was an active volunteer at her children’s schools.  Returning to northeastern North Carolina in 1979, she worked in several regional libraries before settling in as librarian at Shepard-Pruden Library in Edenton (following in the footsteps of her grandmother, Penelope Whedbee McMullan, who was the first librarian when Shepard-Pruden was established at the historic Cupola House in 1921).

After retirement in 1993, she lived in Charleston, South Carolina, where she volunteered her time for the James Island Senior Center as well as worked as a substitute reference librarian for the Charleston County Public Library system.  She moved to Hertford, North Carolina, in 2000, singing in her church choir and becoming active in local community theater and the Albemarle Chorale and before settling in with her daughter Penelope’s family in Nags Head in 2015.  In the final years of her life, Anne received loving care from her daughter Penelope in the comfort of the Carroll home.

Anne was cared for in her final days by Dr. Imran Syed, who acknowledged her as the kindest, most wonderful lady – and his declarations truly summed up the essence of Anne McMullan. She was drawn to the overlooked, the neglected and downtrodden by a desire to help, uplift and provide care, and if you were fortunate enough to have known her you were lucky indeed. But her modest, gentle manner and soft Tidewater accent belied a feistiness and adventurous heart, for she was highly intelligent and curious, with a life-long love of reading.  If you are moved to charity in her memory, she was pleased to support her local community theater (theatreofdareobx.com).

A memorial service is planned for June 25, 2022, 11:00 a.m. at St. Paul’s Episcopal Church in Edenton, North Carolina.  Her ashes will be interred at Holy Trinity Episcopal Church, Hertford, North Carolina. Please visit  www.gallopfuneralservices.com to contribute and share condolences with the family. Gallop Funeral Services, Inc. was entrusted with arrangements.

May Eternal Light shine on Anne and bring peace to all who loved her.

A kind and lovable person

Knew and admired Anne for a long time as Librarian and when retired living in Hertford. Much love to all her family.

So sorry to hear about your mother’s passing. She sounded like a delightful person. Sorry I did not get to meet her. Love you my friend. Marian J. Palmore

Condolences to the whole family and joyful celebration for a life well lived. Heaven has a new Angel!❤️ To God be the glory!

Our hearts are sad to hear of Anne's death. May God shine His perpetual light on her and provide comfort and peace to all of her family. She will surely be missed.

Phil and Norma, So sorry to hear of Anne's passing. Our thoughts are with you at this difficult time. Barbara & Edison