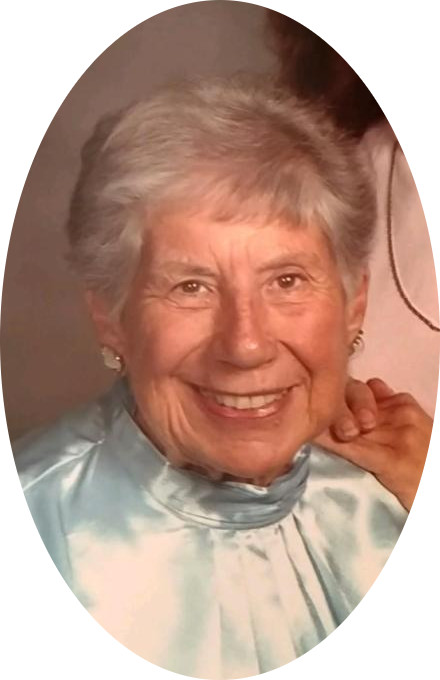 Manteo – Adrienne Beatrice Coviello Palma, 88, formerly of Marlboro, NJ, and Elizabethtown, NC, passed away on January 1st. in Manteo where she resided.

Born in Brooklyn, New York, on September 21, 1929, she was the daughter of the late Michael and Anna Coviello. She was preceded in death by her brothers, Alexander and Michael, and sister, Josephine.

She grew up in Brooklyn and graduated from Fontbonne Hall Academy, Woods Secretarial School, and St. John’s University.

She married Salvatore A. Palma, deceased, and raised her family in Marlboro, New Jersey.

She was a loving mother and wife, deeply devoted to her family, whom she put ahead of herself.

She was her children’s biggest cheerleader and was a constant positive influence.

She worked for Marlboro Township Schools and for Phelps Dodge/Celwave in Marlboro.

She was very active in the Saint Gabriel’s Church community. She was an excellent cook, and enjoyed having friends and family around the dining room table. She was an avid reader, loved gardening, and enjoyed going to New York to see Broadway shows and the opera at Lincoln Center.

Upon retiring, Adrienne relocated to Elizabethtown, NC, where she was active in a bowling league, and participated in the NC Senior Games in basketball, bowling, and table tennis. She was a volunteer at Bladen County Hospital.

After relocating to Manteo, she participated in activities at the Dare County Center and volunteered at the Hotline Thrift Store in Manteo.

She was preceded in death by her daughter, Jo Ann Palma James.

She is survived by her son, Anthony Palma of Little Silver, NJ and his wife Kate; son in law, David James of Fredericksburg, VA; daughter, Adrienne Palma of Manteo, NC; and four grandchildren, Michael, David, Christopher, and Ann.

Her children and grandchildren were the joy of her life.  She will be remembered for her love of faith, family, and her generous spirit where she always unselfishly gave to others. Her house was a happy home filled with warmth, love, and laughter.

The family wishes to thank to all caregivers, especially Nolan, and Dare Home Health & Hospice.
Donations in her memory may be made to St. Jude Children’s Research Hospital, Memphis, TN, or to Deborah Heart and Lung Center, Browns Mills, NJ.

Condolences to the family may be expressed via the online register at www.gallopfuneralservices.com.