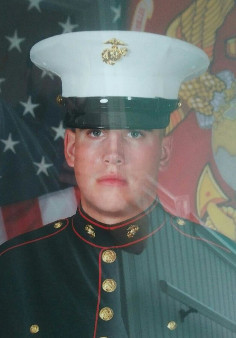 Cpl. Ryan Fetty Murphy Holdaway went home to the Lord on April 23rd, 2017.  Ryan was a Medically Retired Marine from 2007 to 2012.  Ryan was in intelligence and had the honor in serving with Marsoc.   During his time in the Marine Corp he also played semi-pro Football for the Jacksonville Bulldogs.  The Marine Corp and Football were the two most important things in his life other than his Family.

Ryan was a gentle giant who loved passionately.  He didn’t mind letting you know how he felt about anything and loved a good debate.  His passion for life showed in everything he did including Wake Surfing, Football, Snowboarding and Shooting.

We apologize in advance if your name was missing but know that Ryan loved his family very deeply.  The celebration of life will take place at Jeanette’s Pier at 6 pm on Thursday April 27, 2017.  The family requests beach attire with flip flops.

In lieu of flowers, memorial donations in Ryan’s memory are welcome at http://giveto.ucla.edu/fund/operation-mend .