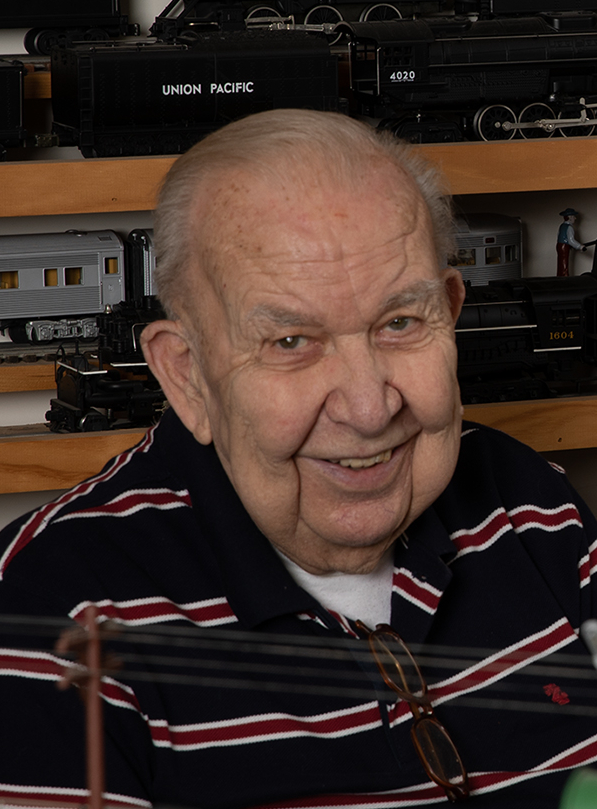 Peter Michael Turek passed through death into Life on November 23, 2021, at his home in Colington Harbour, after a brave journey through a long illness. He was 90.

Pete loved to say, being born on the 4th of July, that the whole country got the day off to celebrate his birthday! He loved both his heritage and his country. After graduating from New Britain High School in 1949, he enlisted in the United States Air Force, serving until 1954. While stationed at Langley Field in Virginia, he met the first love of his life, Pat, and they married on May 1, 1954. They moved to Newington, CT, where he worked for Stanley Works and apprenticed as a tool and die maker. His talents for making and building needed a greater outlet, so he began working as a builder for Variety Homes. He later formed his own construction company, specializing in custom homes, American Greeting Card stores and Mister Steakhouses throughout CT and VT.

In 1986, he and Pat moved to Colington Harbour where he continued with Pete Turek Construction to build and remodel homes up and down the Outer Banks. A generous and giving man, he and Pat housed a Mexican exchange student, Joaquin Reyes, for his senior year in high school. He also joined the Coast Guard Auxiliary, headed the building committee and later served as a board member for The Colington Harbour Association and was active as a member of the Holy Redeemer Catholic Church.

After Pat’s long illness with ALS, Pete remarried, and he and Eve began their life together in 1997. He often said many people do not get to enjoy even one lifetime love, but he had been blessed with two.

In 2000, he became the manager of Colington Harbour and late in 2005, he and Eve bought Yellowhouse Gallery from its founder; they bought SeaDragon Gallery late in 2015. He immediately turned his creative talents and builder’s skill into custom framing, serving hundreds of customers in his years at the gallery until declining health and strength finally forced an unwilling “early” retirement – at 89 years old!

He loved music, and visitors to his frame shop would hear tunes ranging from country to pop, classic crooners to Christmas and gospel hymns to polkas. His favorite hobby when not working was model trains, and he designed and built increasingly complex layouts after marrying Eve, “for the grandkids.” (Of course, everyone knew who was the biggest kid of all!) He had a wonderful sense of humor and a big sweet tooth and a smile that could brighten the dreariest day.

A man of deep faith and resilience despite much personal loss and heartache, Pete spent his life as a Master Builder – building a home for his parents to call their own, building dozens of houses and hundreds of frames, and most importantly, building a family legacy with love.

His funeral service will be held on Saturday, December 4 at 11 a.m. at All Saints Episcopal Church in Southern Shores with a reception to follow. Please note the church and family are requesting those attending to wear a mask.

In lieu of flowers, contributions can be made to the All Saints discretionary fund, which assists needs in the community unmet in other ways, to ICO (Interfaith Community Outreach), St. Jude’s Children’s Hospital or the Muscular Dystrophy Association.

I am so sorry for your loss, Eve, but I know you will be comforted in the knowledge that he will be waiting for you in his new Home. His was indeed a life well-lived and you were a pivotal part of that. He will be missed by all who knew him. May you continue to be lifted up by the many who have prayed for peace and comfort for both of you. You have been a pillar of strength throughout this journey and now you deserve to take care of yourself as carefully as you cared for Pete. Much love and long distance hugs to you, Eve.

Dear Eve and family, It has been such a privilege to have known Pete. He was a true gentleman and a kind heart. You and Pete were such a beautiful example of what a marriage should be. I wish there were words to ease your pain. We are praying for you - Melanie, Jeff, Linda & Gordon (Seaside Art Gallery)

Eve, sending prayers for you and the family regarding the passing of your husband Pete.

A life so well lived. Comfort to you and all the family.

Dearest Eve and family, we extend our deepest sympathy on the passing of your loving husband, Pete. Prayers said for all. Sincerely, the Klees family, Eric and Melissa.

May Pete Rest In Peace and rise in glory! ❤️🙏

We loved being part of Peters life. He was a generous and happy man that lived out his faith. We will not be able to be with you at his memorial service since we at in PA but our thoughts and prayers are with you and your family

Pete lived a big life and he was a good man. He will be missed by many, but he left a lot of his spirit behind.

I will never forget meeting Pete Turek for the first time when he generously opened his heart and welcomed us into his and Eve’s home for three days, from the other side of the world. Eve and I had been high school friends 40 years ago. That time in his generous and ebullient presence was a rare treat. He gleefully showed us into his train room and enjoyed sharing his passion and knowledge. Both boys played trains that night. The following evening he took us out and treated us to a wonderful OBX seafood dinner. I will always treasure those days, and my memories of an exceptional, generous gentle man. May he Rest In Peace and rise in Glory. 🙏

I wish I could be there, personally,Eve, but will be with you in every other way . I can still picture lunch with you and dear Pete at Duck Deli. Know you have a lifetime of happy memories. Much love, Betty

Eve, so very sorry to hear of Pete’s passing. He lived a long and meaningful life. You are an angel to be by his side and help him in his time of need. God Bless you both.

Eve, while I am saddened to hear of Pete's passing, I am grateful for the happiness you brought him. He was a loving and giving man, a perfect match for you. Please accept our sincere condolences and rest with the assurance that the angels have welcomed him into paradise.

I consider it a honor to have met and welcomed into your home! My prayers are with Eve and the entire family! I had truly sorry for your loss Melanie

Sincerest Sympathies. We are so glad to have had the opportunity to have known Pete and to see his prized train collections as well.. He will be dearly missed.

Peters sister Mary worked as a Secretary to my dad Dick Colamussi at Stanley works New Britain May he rest I. Peace

Eve, and all the family, Light and love to you all. In that place of many mansions, perhaps Pete is preparing a new one.

Eve, Pete was a kind and supportive man and will be missed. I am sad for his passing. Know that I am here for you and sending much love to you and your family. Thank you for sharing Pete’s and Your journey. Your heartfelt and candid words helped us feel Pete’s and your presence through this challenging time. That took real courage and was incredibly kind. Love, Mary Ellen

Oh Pete you have always been a joy to know. You laughter is as much a treasure as your skill in framing two treasured pieces of art. He gave you life and you NEVER took it for granted. See you later on the Other Side. Eve please know you're in my heart.❤️

What a beautiful life, family, and memory. He left so many monuments to show how magnificent the contributions of a single life can bring. He is and will be missed. May God bring peace and joy into the hearts of all who were blessed by Pete, who was a glowing example and exemplified the phrase "job will done".

My love and prayers to the entire family! His was the first house I ever plumbed on my own. His son is a wonderful man as he was.

With our deepest sympathy - our thoughts and prayers go out to you Eve and the family.

Peter, Faith, I am sorry to hear of your Dad’s passing. My thoughts and prayers are with you and your family as you honor your father’s memory.

To the Turek Family, I am so very sorry to learn of the passing of Mr.Turek. Growing up in Newington and how our families use to get together and how my dad would love to stop and visit whether coming or going to and from Florida. So many fond memories of this wonderful family. Please know that I am sending prayers and hugs to all.

Faith & Family, I am sorry for your loss. Sending prayers at this time in hopes of lessening your loss. Faith, in case you don’t remember we worked together at New Britain Federal Savings.

Dear Eve and Family, I am so sad to hear of your loss of such a great love and kind man. He is not in a hurry, but he will be waiting for you.

Pete was always smiling, friendly & helpful. A master at woodworking and will be greatly missed. I loved hearing about the foxes at the old Yellow House gallery & actually got to see him interact with them - a memory I will always remember about this sweet man.

My sincere condolences to you Eve and family. What a full and rich life he had. May God bless and comfort you.

My deepest sympathy on the loss of Peter. I knew his parents and sisters well. I attended the reception for Peter and Pat when they came home to New Britain. May he rest in peace after lifetime of acomplishment.

Dear Eve, Peter, Judy and all the family, We were so very sorry to learn of Pete's passing. He was the kindest of men and we were blessed to have known him. Our love and prayers for comfort and peace as you journey through your loss. May he rest in peace in the loving arms of our Savior, Jesus Christ. With sincere and deep condolences, John and Pam Buscemi

It was my good fortune to know Pete and to learn from him about serving in a homeowner's association capacity. Pete was one, if not the best, leaders we have had in Colington Harbour. Won't ever forget Pete and his wonderful wife, Eve. Rest in peace, Pete. Reid

Fill out this short survey and we'll give you a chance to win an iPhone 12 https://anti-covid.us/