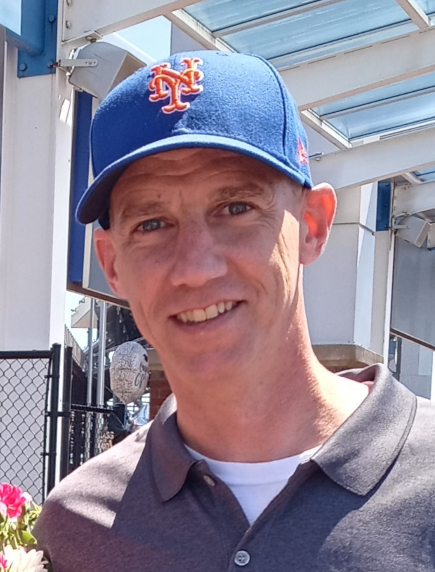 Jamey William Omphalius of Powell’s Point, NC passed away on June 11, 2022 at the age of 45 from a year long battle with Cancer.

Jamey was born on December 31, 1976 in Goshen, NY. Jamey graduated Washingtonville High School in 1996. He was an incredibly competitive player in his younger years; he was a 4 year starter in High School and won a U17 National Club Championship with North Rockland Soccer club.

Jamey was a proud veteran of the US Navy and spent his years after the Navy workingfor Kellogg Window and Door.

Jamey was blessed with a large and loving family. By fate he met his wife Stephanie 12 years ago, at Lucky 12 Tavern. Stephanie remained by his side until the end, with grace and dignity.

Jamey was preceded by his mother, Kathleen. He is survived by his wife, Stephanie; his daughters, Madison and Alexa; his brother, Chuck (wife Kim); his father, William; his Aunt Terri (husband Pete), Aunt Barbie, Uncle Bill, and numerous nieces, nephews, aunts, uncles and cousins.

A loving husband and devoted father, Jamey was charismatic, funny, and genuine to all he met. He was not only a soccer enthusiast, but an avid fan of the Mets and the Jets and rarely missed the games on TV.

Two “Celebrations of Life” will be held to remember Jamey. On Saturday, June 25th,
2022 beginning 2pm, at the family home, 166 N. Spot Rd, Powell’s Point NC 27966. On July 30th, 2022 beginning 1pm, at the home of his brother Chuck, 54 Turkey Run, Hopewell Jct. NY 12533. In lieu of flowers the family prefers donations be made to his daughter’s for college. If you find it in your heart to make a donation, the family will certainly be grateful. Madison & Alexa College Fund at https://gofund.me/de1f6704. Condolences and memories may be shared at www.gallopfuneralservices.com.

You are missed dearly by so many people that you have touched. I love you like my Brother and will cherish your memories for the rest of my life. Until I see you again.

My sincere condolences to you and your family. I will forever remember the good times shared. RIP

I will forever miss you ❤️

You will forever in my heart! Rest In Peace. Till we meet again.