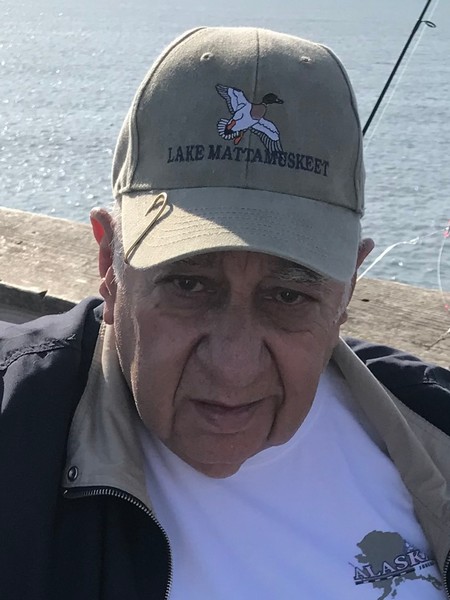 Frederick Carmine Bamonte of Nags Head, NC, died in the late afternoon on October 15, 2021 at the age of 82.

Fred was born in Brooklyn, New York on November 15, 1938.  He met the love of his life in New York and together they raised four boys.  Their family trips to the Outer Banks eventually became permanent as they settled in Nags Head.  Fred quickly became the ultimate volunteer in his retired state.  From his first volunteering adventures at the North Carolina Aquarium to the Bodie Island lighthouse.  Fred loved to be involved and found some of the most unique jobs working at Jennette’s Pier and the Whale Head Club.  Sharing his love of the Outer Banks with locals and visitors is what brought him the most joy.  Fred took the time to learn the history of the Outer Banks and although he was not a local, he could share information like he was. Fred’s best friend was his wife Sandy, together they took amazing trips through Europe and spent time chasing their children and grandchildren all over the country.  Fred is a member of Holy Trinity Catholic Church where he volunteered his services to teach Baptismal classes and carry communions to those who could not make it to church.  Fred had a beautiful servant heart, always giving back to the community he loved.

In addition to his wife, Sandy, Fred was predeceased by his father, Fred Bamonte Sr. and his mother Josephine Bamonte.  His spirit lives on in the hearts of those who knew and loved him.

A mass will be held in Fred’s honor on Thursday, October 21, 2021 at 11:00a.m. at Holy Trinity Catholic Church in Nags Head, NC.  In lieu of flowers please make a donation in honor of Fred Bamonte to the North Carolina Aquarium Roanoke Island. Donations can be made through the following link: https://ncaquariumsociety.com/donate/

We extend our deepest sympathies to all of you. We received the news of Fred's passing with bitter sweet emotions. Knowing that he is now healed, whole, and with Sandy in heaven has eased our sorrow. Fred was instrumental in the religious education of our youngest son, Matthew, who to this day is an active Catholic. He also supported Matthew's successful efforts to attend the Air Force Academy back in 2006. Matthew and his wife Nicole are holding all of you in their prayers as well. Fred was a dear friend and he will be greatly missed. Fred's love for his family, the Church community and the Dare County community will be rewarded as God presents him with a beautiful crown in heaven. May he rest in peace. With love and prayers for comfort for each of you, John and Pam Buscemi

You Father was a great person and a true servant of God. His presents at Trinity will be missed.

Another Wonderful Pop Pop is at Peace ! Love and prayers to the entire Bamonte family I know you will miss him dearly 💞🙏

Oh Fred you will be missed. And I know you are in heavan with sandy.

Fred and I worked (volunteered) together many years at the Touch Tank in the aquarium. He was the best! We had such fun sharing and caring for our animals there and explaining them to the guests at the aquarium. All who knew him have a tender place in their heart and wonderful memories. Sending comfort to his amazing family which he so loved.

I am so sorry to hear of his passing. He was such a sweet, kind, gentle man. He never complained. Heaven gained an angel. He will forever be remembered in my heart.

It was an honor and privilege to know your father, I will forever remember us setting up the manger at Holy trinity, miss your parents, they are gone but not forgotten...imagine they are strolling on golden streets with angel wings, respectively jody and the PREISER family.

I am so sorry to hear of the loss of Fred. My sympathies to the Bamonte family and friends. He will be deeply missed at Whalehead where he was a loyal long time volunteer. He helped guide many of the interns and made friends of many of our visitors. In fact, people would ask what day Fred would be working and come for a tour so they could talk to him! You are well loved Mr. Fred.

Met Fred as a coworker at Jeannette pier in 2011.What a great guy.So sad to learn of his passing.

Such a gentle soul. We briefly worked at the aquarium at the same time. When I was confined to my house after a surgery, he brought the sacred host to me quite a few times. What a blessing in life he was to those he met. Condolences to his family.

Fred will be missed. Sending many blessings to his family that he was so proud of. I know first hand how difficult it is to loose both parents so closed together. Hoping your memories will help you heal during this very difficult time.

Our hearts are with you. Fred and his wife Sandy were two of our favorite people. Generous, kind, living and giving. I still can feel Fred’s hugs and dedication to his volunteering. Holy Trinity and the Outer Banks will miss him, as we do his wife Sandy.

I thank God for my dear friends Fred and Sandy, and filled with relief that God has reunited him with her in a place close to God’s heart. Bobbie and I love them both so much.

Please accept my most sincere and deepest condolences. I’ll never forget chatting with him at the TOUCH TANK. He’ll be missed.