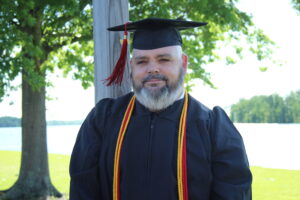 Gallop Funeral Services, Inc. has announced that senior service technician Richard Heath Jackson has graduated with honors from Mid-Atlantic Christian University (MACU) of Elizabeth City, NC with a Bachelor of Science (BS) degree in Christian Ministries and Biblical Studies. Jackson was also the recipient of the MACU “Christian Ministry Award” for exhibiting dedication to Christ and His Church and exemplary service in His name. He was also inducted into Theta Alpha Kappa (TAK) a national honors society for religious studies and theology.

Jackson resides in Colington, NC with his wife Pamela and two sons.  He has special expertise in exegetical preaching and ministry development. Jackson has served the local community faithfully for several years in both supporting and leadership roles.