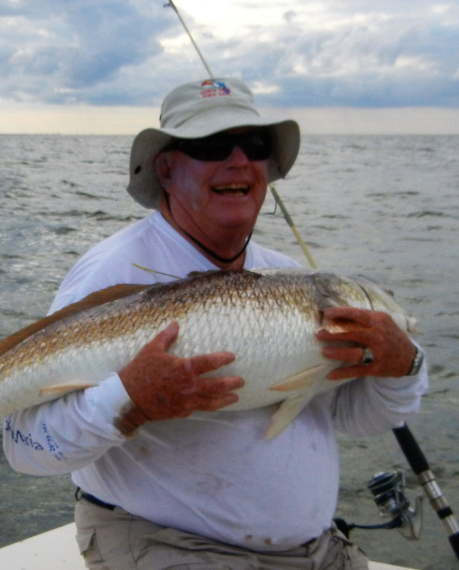 Warren Callaway Martin, Jr, 79, died peacefully in his sleep on March 13, 2022 at his Manteo home residence.

Warren was born in Burlington County, NJ and grew up in Cinnaminson, NJ where after getting teaching credentials at Shippensburg University, he taught in the school system for some 40+ years.  He was also the area’s night school principal, summer school principal, an aide to a New Jersey Congressman, a manager at a liquor store and even with all that managed to spend several vacations and summers here on the Outer Banks.   When he retired on The Outer Banks in 2004, he worked at the Oregon Inlet Fishing Center and for Mac Midgett.

Throughout his entire adult life he was a dedicated track and field official in the mid-Atlantic region and became the head referee at The Penn Relays in Philadelphia overseeing the hammer, discus and javelin events every year.  He was a seasoned representative of USATF and a member of the SNJTF In addition, he was an avid fisherman first in the New Jersey area and later on The Outer Banks.  He did in-shore, off-shore, surf fishing, ran crab traps, you name it, all from his soundside home in Rodanthe and wherever else he travelled.   This February he fished the winter away in Key West, FL.

Warren is survived by his wife, Kathleen Sparrow Martin, of Manteo.  In addition, he is survived by his stepchildren from his first wife, Phyllis: Tom L Harder of Lorida, FL; Earle Harder Jr. of Superior, CO; and Susan Molnar of Greensboro, NC; and Frank Matthew Sparrow, III of Raleigh, NC and Brian Sparrow of Brooklyn, NY by his second wife, Kathy.  He has a total of 8 grandchildren and 3 great grand-children in Colorado and in North Carolina.  He was predeceased in death by his parents Ethel Mae Murphy Martin and his Father, Warren Callaway Martin, Sr as well as his first wife of many years, Phyllis Jones Martin, who died in 2009.  In addition, Warren had the privilege of having two lifelong friends whom he met while in elementary school and to the day of his death remained close with, Ralph A Cann, III, of Rodanthe and Greensboro, NC and Thomas E Weber, of Riverton, NJ.

He was a member of the Ancient Free & Accepted Masons of Manteo, NC.  A member of St. Andrew’s by the Sea, a lifelong Episcopalian, a proud Eagle Scout, a volunteer at the OBX Sporting Events and the Manteo High School athletic department.

A memorial service is being held at St. Andrew’s Episcopal Church on Thursday, March 17th at 10 am. Condolences may be shared at www.gallopfuneralservices.com. Gallop Funeral Services were entrusted with arrangements.

We are holding your hand.

Sending much love to Kathy and family. I am so sorry for the loss of Warren. I enjoyed following your life together filled with adventures and such companionship. Thinking of you and hugging you. Love, Mary Ellen

Dear Kathy and family, Please accept my sincere condolences on the passing of Warren . We were teaching partners at Cinnaminson Middle School for many years . Our team was like a family , we watched for out one another and if you needed help Warren was always there . Warren was a great friend ! With heartfelt condolences , Helene O’Neill

So sorry to hear of Warren’s passing.

Kathy, my condolences on Warren's passing. When the 2 of you came to our home in North Hampton, NH I was quite proud to be able to serve you good seafood on my patio. I always enjoyed my conversations with Warren.

Warren will forever remain in my memories as a kind, intelligent and fun loving soul. I was fortunate to spend a lot of time with him and be a part of some of his fun-filled adventures. I will miss him dearly and cherish the memories. Eileen “Left” Harder

So sorry for your loss. I taught with Warren for many years. He made a difference in this world.

So sorry for your loss. I taught with Warren for many years and he really made a difference in this world.

Kathy, I am sending prayers to you and your extended family. I taught with Warren for 34 years and he was considered the BEST of the BEST! He will be missed.

So sad to hear about my lifelong friend and colleague. Warren was a mentor to many! Bob Greenhough

While we only met Warren as neighbors the last few years, it is a pleasure and honor to have met Warren and have had him touch our lives. He will be missed and will always be in our thoughts. Rest well our friend!

While as neighbors we only met Warren a few years ago, we have had the privilege and honor to have had Warren touch our lives. Warren will always be in our thoughts. Rest well our friend.

Kathy, we are so sorry to hear the sad news. We had so much fun getting to know you through our dinner outings in the Philly/Jersey area. He was an amazingly talented teacher. Warren made history relevant and alive for young students. People have never forgotten those times when he dressed as Uncle Sam. His humor was always present and yet if a student or their family had a serious issue, Warren would work with them behind the scenes. He touched so many lives in such positive ways in the school, on the track and field and in the community. Our condolences to you and the family. May his memory be a blessing.

Kathy, From the time Warren and I first met at St. Andrews we hit it off and had many fishing stories to share. One of my best experiences was fishing with Warren, Tom Weber, Ken Insley, Jim Dugan and (my good friend) Henry Forester on Greg Mayer's Fishing Frenzy in the fall of 2020. Henry and I were thrilled to be invited and the icing on the cake was when a nearsighted sailfish bit my line. I have the citation framed in my home and thank Warren each time I walk by it! God's peace to you! Ned

Dear Kathy, We are so sad to hear of the passing of your husband, Warren. We know you will miss him but so glad you had so many happy years together. With love, Lou and Eric Cleaver

Kathy, So very sorry for your loss… our deepest Sympathies. Always Bonnie & John

I am so sorry to hear of Warren's death. I worked with Warren at Cinnaminson High School; we were advisors for the Human Relations Club. Warren had a great sense of humor and a sincere concern for others. You have my sincere condolences.

Kathy, so sorry to hear about Warren and our thoughts and prayers go out to you and your family. Carol and I taught with Warren for 35 years and I was fortunate enough to go on many fishing trips with Warren and his buddies. He loved to fish and he is well respected throughout our educational community in Cinnaminson. Thinking of him fondly and our sincere condolences.

I taught with Warren at Cinnaminson. He was responsible for me becoming a state track official. We worked many meets, including Sectional and State meets together. He was always a confidant and friend.

For decades I enjoyed running into Warren in the Tri-Village area, mostly at Mac's or the post office. He always had interesting things to say and was inquisitive about my exploits. Our conversations were a 2-way street. What a kind and accomplished man! I will miss him.

Dear Kathy and family, My heart is truly saddened at the news of Warren’s passing. He was such a special man. Always there to help me with all the concerns I had with my music programs as the choral teacher at Cinnaminson Middle School. He was particularly supportive when my husband was considered for his appointment on NJ Superior Court. A more loyal friend you could not find. My deepest condolences to you and your family. Heaven shines even brighter now. Fabiene Brown

Kathy I am sorry that Warren has passed. It was always fun to run into you both downtown. Warren always had a quick witted comment to make us laugh. I pray for you & your family.

Kathy my heart hurts for you, so sorry for your loss. Prayers for peace and comfort. Dawn and Scott Buckalew

So sorry to hear about Mr. Martin's passing. He will always be Mr. Martin to me, one of the best teachers I had at CMS and great friend to my mom. With sympathy - Chrissy Ott

Kathy and family, I adored Warren. I'm so sorry for your loss. Hugs and blessings to you all.

I met Warren many years ago at my shop. Our business relationship evolved into a personal one. His dry whit and humor always matched mine. Tight lines my friend, you are now in the arms of the best fisherman ever.

So very sorry to learn of Warren’s death tonight. He was my most colorful and entertaining customer and will be so missed. My condolences to you, Kathy, and all the family at this difficult time.