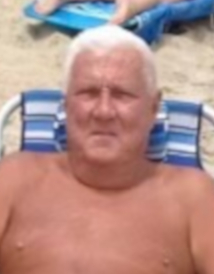 Thomas Jackson Polson “Jack”, 76, of Kill Devil Hills passed away peacefully on May 27, 2021 after a long battle with salivary gland cancer.

Jack grew up in Portsmouth, Virginia. After graduating high school, he honorably served in the Army before leading a long career in the grocery and meat-cutting industry that he somewhat enjoyed.

What Jack truly did enjoy was spending time with his friends, family and long-time partner Norma Scazzafavo. Jack was a fun and loving partner to Norma, and they could often be spotted in beach chairs at the edge of the ocean or out living the OBX life. Jack valued quality time with his children and grandchildren so much that it often brought him to tears.

In true Jack style, he was either the life of the party or the grumpiest one there. He had many friends who adored him for his sense of humor and tell-it-like-it-is attitude. He had a knack for honesty, and the self-proclaimed “prettiest legs on the beach.” Jack enjoyed Mama Kwan’s, country music, Platinum vodka and Diet Pepsi, traveling, the Hallmark channel, NASCAR, and tinkering with the Jeep. He would also think it important to note that he was a die-hard Tar Heel’s basketball fan.

Aside from being survived by his partner Norma, Jack also leaves behind his daughter Debbie Fernandez (Scott), his son T.J. (Nikki) and eight loving grandkids, Lauren, Evan, Kaleigh, Aidan, Jackson, Regan, Lilly and Olivia. He is also survived by his sister Norma Langston and stepdaughter Jen Batchler. Jack joins his youngest son and best friend, Jonathan, in heaven.

The family held a private gathering last weekend and will host a celebration of life in the near future; date to be announced here. Expressions of condolence are welcome at www.gallopfuneralservices.com. Gallop Funeral Services, Inc. was entrusted with arrangements.