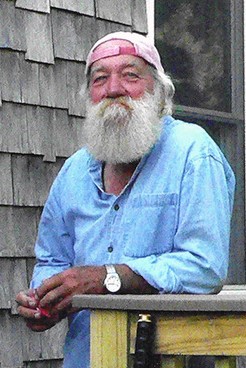 Roy Dorsey Conner passed away of natural causes at the Outer Banks Hospital in Nags Head, NC on October 24th 2022 at the age of 81. He is predeceased by his sister, Patricia Willis and parents, Betty Fulcher Conner of Buxton, NC and Roy Conner of Georgia. He is survived by his niece, Tami Willis of Frisco, NC and Joe Willis of Norfolk, VA, as well as many cousins.

Dorsey was a man who appreciated the quality of living simply. He found joy in quietly sitting in front of a fire, painting, and talking with friends. There are many ways to describe Dorsey: hermit, naturalist, Uncle, artist, sign painter, hippy, eccentric, curmudgeon, animal lover, spiritualist, musician, wood butcher, hardheaded, philosopher. He was someone who enjoyed a good glass of Port and loved the Blues.

While in the air force as a young man, Dorsey was stationed in Scotland. He spoke of the country with great fondness and wished to return someday. For a short period, he was a door to door salesman for Gillette Shavers — hard to imagine! Later he hitchhiked across the United States and finally came to rest, broke and hungry, at what was the beginning of “South of the Border.” They gave him an application, which he filled out using his characteristic script. He was hired to do signs on the spot.

Dorsey eschewed a traditional lifestyle and chose a pared down, simple way of living instead. He made his home in a hearse, a tipi, a boat, a pyramid, a shack (built partly into a hill), many tents, and numerous vans. He kept office hours every morning from the bench in front of the Rod and Gun in Frisco. He provided for himself with paintings, sign work and odd jobs. He was and will always be a beloved personality on Hatteras Island.

Dorsey suffered a stroke in 2008 that left him unable to talk and partially paralyzed. His health separated him from the island in 2009, but he remained on the Outer Banks. He moved into Spring Arbor, where he lived for 13 years, and again to Peak Resources where he lived his final 4 years.

Despite being unable to speak, read, or write to communicate, Dorsey formed close relationships with his caregivers in both residences, where he received excellent care. His sense of humor and gentle nature shone through and allowed him to connect. He lived post stroke with a grace and acceptance that was inspirational.

Dorsey will be missed. Even though he has been away from the island for many years, the knowledge of his passing has brought him back, waving the mist of the stroke away. May the tales of Dorsey drift gently into the universe, now and forever. Peace.

The date for the scattering of Dorsey’s ashes will be announced at a later date. In memory of Dorsey, a donation can be made to “Friends of Felines-Cape Hatteras Island” PO Box 310, Avon, NC. 27915. Please share words of comfort with the family at https://gallopfuneralservices.com. Gallop Funeral Services Inc. was entrusted with arrangements.

Dorsey was a great cousin and he had a great smile and was pleasant to be around.

Dorsey was one of a kind, if you never met him or didn’t know him, you missed a good one !! He was an original !! regret that I hadn’t seen him in long long time. I thought of him often, needless to say that doesn’t matter now.He was kind, generous , peace loving old school hippie. He will be missed by many. RIP Dorsey

My prayers are with you all. I remember Dorsey gave me a small shell when I left for college in 1973. He had painted a lighthouse inside. He told me to always remember where HOME is!! I will always remember and never forget.....

Dorsey he lived with us 1960 for three years in winston salem n.c. my mother could relate with Dorsey always he was a great cousin we understood and could relate to him . I have known Dorsey his whole life as a young boy in wilmington n.c. and when my mother spend the summers down at hatteras he always came by to visit alot. you had to. really know Dorsey to relate with him. he will be missed dearly. he now is with his mother and sister in heaven. he loved his family.

Another island icon gone. RIP brother.Here’s to us and those like us, there’s not many left.

Mr. Dorsey was one of my favorite residents. I have had the pleasure of taking care of him for roughly 10 years. He would always brighten my day when I would come in to see him because he would have a huge smile on his face and give me the peace sign. He was such a sweet man. It was a true blessing to have known him. Mr. Dorsey you will forever be missed! I give my condolences to the family!

his was a life well lived

No one ever had a better friend.

At Spring Arbor I was privileged to care for Dorsey for his entire stay, forming a friendship as we were about the same age. Admired the art in his room, kept his pepsi stocked,and once even tried to get him to paint left handed, to no avail. He was a role model in how to accept one's fate. Stayed stubbornly independent as long as possible. And had a great smile. Would have loved to be his friend when he was younger.

Dorsey was the kindest soul. He was an Island Treasurer. He will be missed by many. Rest In Peace kind soul. Prayer’s of Peace and Comfort for the family.