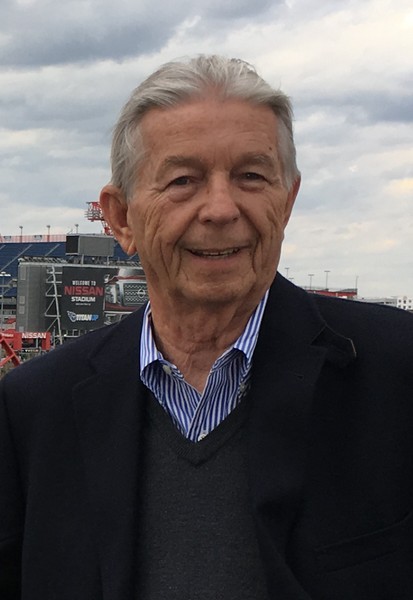 Kitty Hawk- Roy Clayton Smith, Jr. passed peacefully into eternal life July 25, 2022 after a long battle with Alzheimer’s. He was at his home surrounded by the family and friends he loved most. Roy has been joyously reunited with his parents Roy Smith, Sr. and Mary Hawkins Smith, his brother, Carroll Smith, and his step-children, Sharon Church, James Hancock, and Wayne Hancock.

Roy’s remarkable life began in Kinston, NC however his childhood was spent in South Norfolk, VA which he considered home. Roy proudly enlisted in the United States Marine Corps and after completing his commitment to his country, he started his career in women’s fashion working with Brooks Fashions until joining Cache Inc. a high-end women’s apparel company based in New York City. Driven and capable, Roy built a successful career with Cache as the Executive Vice President running more than 200 Cache locations around the country. Along the way, Roy met his future wife, Pamela Kulsa. The couple married, traveled, and lived a fairy tale love story which led them to retire to the Outer Banks In 2002.

Here, Roy channeled his energy and intelligence into a second career. He obtained his North Carolina real estate license and thrived selling properties with Coldwell Banker Seaside Realty for several years. In 2018, Roy took his second retirement which allowed him time to pursue his passion for maintaining his lawn and gardening. Before his illness, Roy also loved fishing, spending time on the family’s boat and taking care of his cats, Penelope and Archie.

The family has honored Roy’s directives for cremation. Plans are pending for his celebration of life gathering which will be held at Duck Woods Country Club in August.  Please share condolences and your favorite memories of Roy at www.gallopfuneralservices.com.  Gallop Funeral Services, Inc. was entrusted with arrangements.

My sincere condolences to Pam and Roy's family and friends. I only met him a few times but he was a class act. He will surely be missed.

On behalf of Roy's grandson, Todd Hancock and his team here at Nichols Station, we would like to offer our sincerest condolences. We pray that comfort and peace will be found knowing Roy left a great legacy!

Sending condolences to Pam and Roy's entire family. Even though we only met once, he seemed like an awesome gentleman. Prayers.

Pam we wish you peace during this time. He was a great person and you were both lucky to have had 30 years of love. May God bless you.

Roy was such a kind, quiet man and true gentleman. We will miss him.

Pam so sorry for your loss! Thoughts and prayers to you and your family. You and Roy had a beautiful relationship! I enjoyed so many conversations with Roy over the years! He was so supportive of all of us agents at Coldwell Banker Seaside always ready to give a helping hand. He will be missed by so many. Love Debbie and Jimmy

Pam Sorry to hear of Roy’s passing. Our condolences. Clifford and Martha Gray and Family

Sorry to hear this. You were the love of his life. He shared such a caring personality to all he met. I do recall our first meeting in Chicago. Sending prayers for comfort with love and gentle hugs to you and the family He and brother Carroll can now spread their influence together with the Saints in Heaven.

Roy was such a sweet man and wonderful neighbor. We will miss him. Our sincere condolences to Pam and the family.

I am thinking of you in this difficult time. Nothing I can say that will ease your pain. There are no words.

Sandy and I graciously give heartfelt condolences to Roy’s family and cherished friends. A wonderful, peaceful, intelligent man, with an insight that made him a very interesting conversationalist. Roy, Rest In Peace.

Dear Pam , My deepest condolences for your loss . Few people I have known that has made a better impression than Roy . A real PERSON ! My best regards , Paul

My deepest sympathies to you and the family. Roy was so kind and considerate when we met 10 years ago; he was a true gentleman with a sweet soul. May God’s peace that passes all understanding give you comfort in the days ahead.

I am so saddened to hear of Roy’s passing. I was one of the lucky cache employees who could say he was the best boss. I not only looked up to him professionally but as my dear friend Pamela’s husband. I am sending my deepest condolences and prayers to you Pamela. I will continue to keep you in my thoughts. I love you very much. May Roy rest in eternal peace. He certainly will be missed.

My deepest sympathies to Pam and Roy’s family and friends. Roy was a special humane he saw the best in people and inspired people to be the best they could be. I credit Roy for providing opportunities to many ambitious people. I know I am the person I am today in part to Roy’s mentoring. Thank you Roy.

Roy, You made such a difference in my life and I want to thank you for all you did . You were the best boss I ever had ,always giving such encouragement and pushing me and my teams to greatness . I shall never forget your words of motivation and your friendship We will all miss you Until we meet again Penny

Pam, we are so sorry to hear about Roy’s death. May all of your memories, family and friends help you to get through this difficult time. You are in our thoughts. Marcha and John

I will miss Roy's creative imput and stylish haberdashery everytime he came to visit. I am blessed to have met Roy, and send my deepest condolences to Pam and their extended family.

I will always remember Roy as a true gentleman. He was a great inspiration for me during my days at Brooks Fashions.

The Smith Family has been our close friends for many years and we value knowing them all. Roy was such a bright and friendly person. He was a pleasure to get to know and to be around. Pam and family, please accept our sincere condolences.

Pam, So, so sorry to hear of your loss. I send sincere condolences.

Sincere condolences to your family for the loss of dearest Roy. I will miss his sharp style of dress, quick wit and smiling face. A true gentlemen and a class act! I am honored to have known him and enjoyed his company.

Pam and family - you are in my heart and my prayers - Roy was such a lovely man and I was honored to know him. Wishing you peace and comfort.

Pam and family, I am so sorry for your loss. Roy & I had many conversations over the years about his childhood home, South Norfolk. I grew up just a few miles from there and we would reminisce about the old neighborhood. I spent many a Saturday afternoon with friends at the old movie theatre in "Downtown" South Norfolk. It was a special place to grow up. Pam, I know you will miss your husband, partner & best friend and I hope that all of your happy memories will help you get through this difficult time. You had a remarkable life together and you were always there for each other. So sorry again and prayers for you and the family. Love Patty.

Roy is a friend of my older brothers(Sherwood and Charles) and I remember Roy growing up in South Norfolk. Roy visited our family get together in Duck, NC a few years ago. We enjoyed his visit and conversation with him. He joined the Marine Corps to serve his country and he looked good in his uniform. My condolences to his family, May God bless each one.

Always enjoyed seeing his smile as it shared a kind heart. Roy was as genuine as they come and we are greatly blessed by the commitment of your love