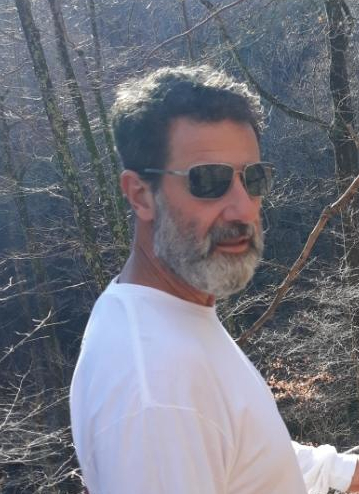 After completing college, Ronnie worked as an Environmental Health Specialist with the local health department.  Later, he started his own construction business, Narrow Shores Development Inc. established in 2003.

Ronnie can be described as gentle, but strong, kindhearted, selfless, and loving; not to mention his wacky sense of humor that everyone adored.

Ronnie’s greatest joys besides spending time with his family included fishing, hiking any trail he could find, and running for miles on end.

Ronnie is survived by his parents, Mabel & Ronnie Cooper, Sr., his wife of 25 years, Anne Wiese Cooper, and their children Caleb, Caitie, and Dylan Cooper of the home. Also surviving are his siblings Jennifer Cooper Zak and husband Ben, along with nieces Anna and Brooke, John Cooper and his wife Elissa along with their four children; Lauren, Marshall, Caden, and Carly. He was the Son in Law of Bobby and Delores Wiese of Hertford and brother in law to Jennifer Wiese McGough and husband Adam along with their children, Finn, Juno, and Haddie of Ohio. He was preceded in death by maternal grandparents Marshall and Anna Grandy, and paternal grandparents Joe Cooper and Shirley Castellow, and paternal step-grandmother Maria Cooper.

Please express condolences to the family via the online register at www.gallopfuneralservices.com.  The family entrusted Gallop Funeral Services, Inc. with arrangements.

Ronnie and Mabel, My heart aches for you and the kids. Please know that you are in my heart and prayers as you go through this heartbreak.

Ronnie will be missed. He was a wonderful and witty person who loved his family and life. I met Ronnie when I worked with Dr. Patrick Kessler , M.D. in Kitty Hawk, NC. I asked around for a good builder that could be the one that would build my home for me in Aydlett, NC. I was told that Ronnie could fit that bill! I never was wrong about connecting with Ronnie! He was a true "Southern Gentleman"! Ronnie built my retirement home to the "T"! I had retired from the Army Medical Corps and Ronnie was the most professional and kind person that I had ever met!! Now I have been here for 15 years on Deerfield Lane in Hunters Woods and Ronnie and his wonderful wife have been my neighbors since my house was constructed. I can always remember Ronnie walking his dog past my home that he built and asking me if there was anything that he could do to the house. Well...my answer was always the same..."No Ronnie, you did the best work that a retired Army Soldier could ask for, thanks good friend, thanks for all your kindness and friendship". With that, I'll close. I expect that Ronnie is in Heaven building homes for the Good Lord.

Anne, Caleb, Caitie and Dylan, We are so very sorry for your lose. Ronnie was a wonderful person and Mark and I have been honored to call him a friend. The pride in his eyes and voice when we would tell us how all of you were doing lite up the room. You will always have him with you in your hearts and memories. We are here for you if you need anything. Even just to talk. Love, Mark and Robin Leuzinger

For Catie and Ann and your sons. Your family and mine were so intertwined. Our girls grew up together, best friends for so long. I trusted you and Ronnie with my pride and joy, and she loved every minute with your family. Ronnie was such a country boy, so sweet, and cherished his family. I don’t have the words to soothe your pain. Just know Kenzie and I are down the street. We are both here when you need anything. Our thoughts are with you all. We are so sorry.

Mabel, I am so sorry to hear about your loss. Ronnie was a little gentleman as a child and I understand was a good man. Please know that if there is anything you need or anything I can do for you, just call. This is a time of grief and sorry for all of us. Linda O'Neal Magette

Ronnie & Mabel and all the family, We are so sorry for your Great Loss, our Prayers and Blessings are with You, I can't express the sorrow I personally feel about the loss of Ronnie. You are in our thoughts and Prayers, God Bless you all. Gene and Family.

Family.. our hearts are broken for your loss. Ronnie built a house for us, completing it last December. Ronnie was very special to us and we appreciated our time with him.. we will keep your family in our prayers. With love Shirley and Jimmy

Mr. & Mrs. Cooper, Anne & family, I am so very sorry to hear of Ronnie's passing. I will always remember his kindness. Prayers are being lifted up for your family, that somehow you can find peace and comfort during this difficult time. Know that you are surrounded with much caring and love. Our deepest sympathy, Ellen & Family

There are no words at this time that will ease any of this . Just know God is with you all and the prayers of many for your Comfort to go through this Much love to all of the family Jeanne

We are so sorry for your loss. Our love and prayers are with you during this difficult time.

IT IS WITH GREAT SADNESS THAT WE EXTEND OUR SYMPATHY TO THE COOPER FAMILY. WE HOPE THAT YOUR FOND MEMORIES CARRY YOU THROUGH THESE DIFFICULT TIMES. KNOWING HE IS IN A BETTER PLACE WILL EASY YOUR LOSS.

Cooper Family, I am praying for you all during this time of loss. Ronnie was a quiet soul who will be greatly missed by family and friends. He loved his family dearly. Each morning, we greeted each other as he jogged down Aydlett Rd. and myself driving to school. It was a small gesture, but he was part of my morning routine. It is the small things in life that matter the most! Sending you my love to you all.

Please know that though I am at a distance my comfort and heart is with the family. Ron Jr. was special, kind hearted with a quick smile, wiling to help. I was blessed to have Ron Jr. as my 'first' nephew. The Lord's healing be with you.

It has been a tough day this Friday here at my Texas home when I got an early call this morning from my father with some very sad news. I consider Ronnie my best friend growing up in Aydlett/Poplar Branch. We go all the way back to Griggs Elementary School and continued as friends all through high school. He was a great friend to spend time with in our younger years and we many good times together and created many memories. My heart goes out to the Ronnie's family. You are in my prayers and have my deepest condolences. Ronnie, rest in peace my friend, Ricky Mathews

We want this precious family to know we are praying for you. We are here for you if we can do anything.

Ann, so sorry for your loss. Sending prayers and thoughts your way.

Our thoughts and prayers are with you and your family. May you take comfort in the knowledge that he is now in the arms of the Lord and in no pain. Heaven just welcomed another angel to look down on you from above.

I am so very sad to hear the news about Ronnie. I have not seen him since we graduated high school in 1985. He was one of the first people who I met when I moved to Currituck in the 9th grade. We always had a very nice relationship. I remember his mom and dad and siblings being in the stands at the high school football games when I was a cheerleader and Ronnie was on the football team. He was such a kind person with a great sense of humor. My heartfelt condolences go out to his wife, children, parents, siblings and the rest of his family. God bless Ronnie and the entire family. All of you will remain in my prayers.

Anne, Caleb, Caitie, Dylan and family, Please accept my sincerest condolences as you try to navigate the loss of Ronnie. I am heartbroken for you and am sending my love and and warmest wishes for peace and comfort during this difficult time. Love, Janie

I really hate this. I've known Ronnie since we were kids. Ronnie was a good man and an even better neighbor. I enjoyed spending a few minutes talking with him about old times whenever I saw him. He will truly be missed by all. Rest easy my friend.

Anne and Family, I'm so sorry for your tragic loss. You are in my thoughts and prayers. Carolyn Perry

My Dear Anne and family, So sorry to hear this. My thoughts and prayers are with you and your family. Big hugs my dear honey bunny!!

I cannot imagine the pain you are feeling at this time. Ronnie and I worked together at Currituck Health Department for years. I will never forget the closeness Ronnie & I shared as we both have such a quirky sense of humor. Anne & kids I am praying you find peace and take comfort in the many memories you shared. Mabel Jean & Ronnie, Sr. no one should have to bury a child. I prayer God puts a hedge around you and holds you in his arms. Much love, Sandy Brown Evans

Ronnie, Mabel and family, I just saw the obituary and am so sorry for your loss. I can’t imagine your pain especially this first Christmas. Prayers or comfort and solace to all of you.