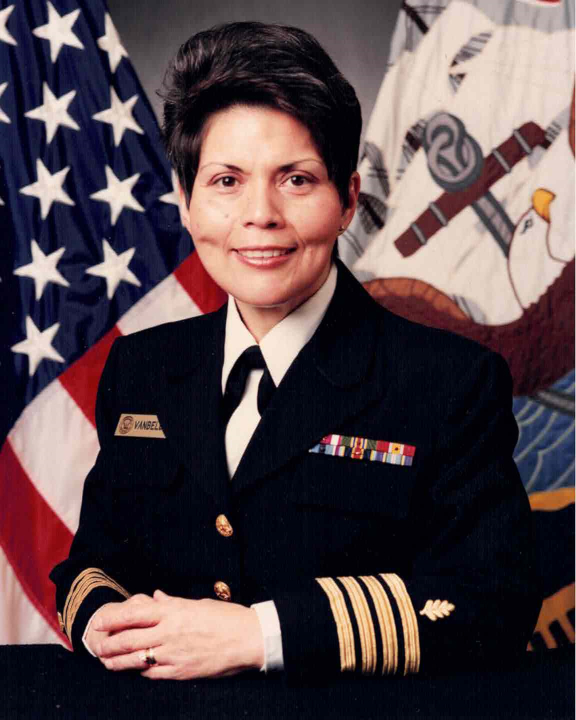 Kitty Hawk- Retired United States Navy Captain Lucy M. Kidwell passed away June 11, 2022 in her home with her family by her side. She was born in Elgin, Texas to Ruben and Anita Mendoza June 22, 1947 (both deceased). Lucy was the oldest of six siblings. She is survived by her husband, Robert D. Kidwell of Martins Point, NC; three children Elizabeth Leonard, Jane Martinez, and Robert Kidwell, Jr.; seven grandsons, James Leonard, David Leonard, Thomas Leonard, James Martinez, Edward Martinez, William Kidwell, and Samuel Kidwell; one sister, Santa Bullard (Gary); one brother, Ruben Mendoza, Jr., her niece, Petrina Bullard; two nephews, Justin Bullard and Austin Bullard; two great-nieces; five great-great-nieces and nephews (all of Dallas Texas), as well as a host of extended family members, former colleagues, and loyal friends from all over the county and the world.

Lucy was a graduate of Peter Smith School of Nursing of Fort Worth, TX as well Texas Christian University earning her Bachelor of Science Degree in nursing. She enlisted in the U.S. Navy in June of 1970 serving in the Navy Nursing Corps. The Portsmouth Naval Hospital was Lucy’s fist duty station. After showing leadership and excelling there, Lucy went on to serve in Yokosuka, Japan, Camp Pendleton (California), Camp LeJeune (NC), Bethesda, Maryland at the U.S. Naval Hospital and at Roosevelt Roads, Puerto Rico where she rose to Director of Nursing and was later named Executive Officer of the hospital. Lucy also completed deployments aboard the hospital ship- U.S. Comfort.

Lucy served her country with honor and distinction. Over the span of her career, Lucy earned the Meritorious Service Medal, a Meritorious Unit Commendation Ribbon, the National Defense Medal (two awards), the Overseas Service Ribbon, and the Coast Guard Special Operations Services Ribbon. Subsequent to her retirement, Lucy was especially proud to have made some two dozen global missions with Operation Smile.  She was ultimately appointed the Chair of Nursing Council for the entire organization overseeing the care of thousands of children around the world.

Family and friends may view Thursday, June 16, 2022 from 5 pm to 7 pm at Gallop Funeral Chapel in Nags Head, NC. The funeral will be held Friday, June 17, 2022 at 11 am at Duck United Methodist Church in Duck, NC. Captain Kidwell will be laid to rest with full military honors at Arlington National Cemetery at a date in the near future.

In lieu of flowers, the family gratefully requests that memorial donations be made in Lucy’s memory to a worthy charity of your choice or to the Freedom Alliance www.freedomalliance.org which provides college funding to the children of men and women who have fallen serving and protecting the freedom of our nation.

Words of grace and comfort may be shared at www.gallopfuneralservices.com. Gallop Funeral services, Inc. is honored to assist the family with arrangements.

Dear Dave, we are so sorry for the passing of your dear wife, Lucy. May the love of your family and friends help support you during this difficult time. With sympathy, Bonnie and Carl

Dear Dave & family, I was so sorry and surprised to hear of your Lucy's passing. I would like to extended my thoughts and prayers for you at this time. Please know you are lifted up today and in the future for strength and guidance. Many fond memories of Lucy at the Mission of Mercy Dental Clinic the years it was open. We had many many laughs. I enjoyed getting to know her and you. May the God of Heaven fill you with all wisdom and knowledge at this time, Sharon Carignan

Dave, may you take comfort in the words and prayers of so many that are grieving your wonderful wife with you. Dianna

It is impossible to put into words anything that would make it justice to the amazing life our dear Lucy lived. She was the image of strength and resilience, beautifully combined with kindness and love. For all of us who got to know the extent of her generosity and witness the magnitude of her heart, she will be undoubtedly forever present. Our eternal gratitude to Lucy, an incredible woman who stood for everything that is right. Our love to David, who stood by her lovingly and faithfully. And our hopes for peace to all in the family. We miss Lucy already and will never forget her.

Dear Dave, I’m so sorry to hear of your loss. I didn’t know Lucy well but now I see what a remarkable life she lived and what she did to make our world a better place. I know she will be missed by you and the family and many, many friends. Fondly, Ann

It was a blessing to take part in taking care of Ms. Kidwell. I pray for comfort and healing for her family, especially her husband as he adored Ms. Kidwell.

My sincere condolences to the Kidwell and Mendoza family. Lucy was an older cousin whom I greatly admired and saw her as a role model in my youth and an inspiration to seek a college degree. She was truly an awesome woman.

Our sincere thoughts and prayers are with the Kidwell family at this sad time.

While I didn't know Captain Kidwell, I can say reading this obituary she lived her life full and well. I have chills reading how she helped so many children, how she served her country and her honorable distinctions. You, Captain Kidwell, are an inspiration. Rest in Paradise and my condolences to family and friends. Lean on one another and live on.

Condolences to the Family. We are all praying to ease your pain. God Bless you all. From Ernest and Carmen Buentello & Family.

I was stationed with Lucy in the Navy. She was an excellent clinical nurse, and always a pleasure to work with. I was so sad to see this, and my heart goes out to her family. I know she will be missed.

Our deepest condolences from the Perez/Diaz cousins in Taylor,Texas to the Mendoza and Kidwell Family. May Lucy’s soul Rest In Peace. Amen.

Dear David we are so sorry for the passing of your lovely accomplished partner. We are out of town and will not be able to attend the funeral, but our prayers are with you. Love, Shirley and Bob Ruff

My deepest condolences, I am a cousin from Texas. I was always impressed with her service as a nurse in the military. We need more people like her to serve our country. May the Lord give you peace in this difficult time. Love ,Irma Torres