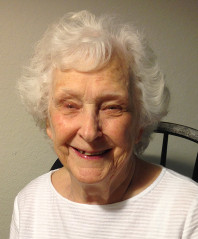 Frisco-  Mrs. Lois Kliefoth was taken home with Jesus June 7, 2017. She was 91. Lois was the daughter of the late Frank and Susan Saksek.  Her four brothers, and one sister preceded her in death as did her son, Timothy Charles Westlund and  her grandson, Derek Westlund.

Lois married Rodney Charles Westlund July 7, 1947 in Cloquet, Minnesota. Their union produced five children, four grandchildren, and one-great-grandchild. They were divorced in May of 1975. Rodney Westlund died Sept. of 1989.

Lois went on to create a successful career with Color Bright, Inc. of  Minneapolis-St.Paul, Minnesota as a bookkeeper.  Eventually, God blessed her with a second marraige.  She met and married Walter Kliefoth on May 13, 1978. Walter Kliefoth  died in January of 1992.

Lois moved to Sienna Garden in Panama City, Fl. She lived there until 2016. At that time she moved to live with her daughter and son-in-law Gary in Frisco, NC.

Locally, Lois was an avid BINGO player and spent many happy hours quilting with her daughter Sue.  She also loved worshiping God with her Cape Hatteras Baptist Church family.

The family will honor Mrs. Kliefoth’s wishes for cremation and for her remains to rest in the family cemetery in Hummelstown, PA. No local services are planned. Condolences to the family may be expressed via the on-line register at www.gallopfuneralservices.com.  Gallop Funeral Services, Inc. was entrusted with arrangements.