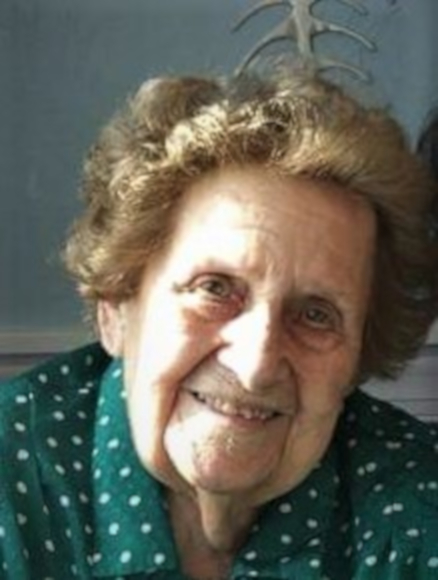 Grandy – On April 20th, 2021, Katherine Mary Baumgartner passed away from natural causes at her home, two days after celebrating her 99th birthday.  She was surrounded by her loving family and friends, who will miss her tremendously.

Kathy’s mother died at 29 and Kathy was principally raised by her maternal grandmother Olga Kutuzov during the depression of the 1930’s.  Her grandmother was an independent small-business person who taught Kathy the value of work, thrift, and fairness with all people, characteristics that Kathy imparted firmly to all her offspring.  She graduated from high school in Dearborn and started her own business in furniture refinishing in Detroit, Michigan, where she met and married Bill after his WWII service in combat as a young Army officer.  They settled in Anaheim, California in 1955 where Bill started a patent drafting business that they worked in while also raising their five children.  At a time when all their money was irretrievably sunk into the startup business, Bill was tragically killed in a traffic accident in 1964, and Kathy was left with 5 children, debts, and a mortgage.  She never remarried but continued to raise her five children, keeping them in school, out of trouble, and on the road to independent and productive lives.  She managed to keep the house by using, as her children often say, “smoke and mirrors.”  She borrowed to train as a nurse’s aide and worked in medical care on night shifts in order to provide a healthy home life for her children’s days and evenings.

At age 65, Kathy retired to Lincoln City, Oregon, a small coastal town not far from her son Daniel and his wife Jacqueline, and her first grandchildren.  Always busy, she grew beautiful flowers and knitted and stitched and worked in coastal craft shops until she was 89. She relocated with Dan & Jacq to Dallas, Texas for five years before finally joining her daughter Colleen in Grandy, North Carolina – her last stop on a long and rewarding journey.

Kathy was a never-ending delight to her family and her circle of friends, which soon came to encompass much of Grandy.  She lived a life full of hardship and happiness, tragedy and joy, and finally of satisfaction with her contribution to a century of change.

Her family also sends their heartfelt thanks to Community Home Care Hospice staff, and the dedicated friends who gave her so much love and care every day in her final years.

All arrangements are provided by Gallop Funeral Services of Barco, NC, including a memorial service to be planned and posted at a later date.  Expressions of sympathy may be expressed via the online register at www.gallopfuneralservices.com.