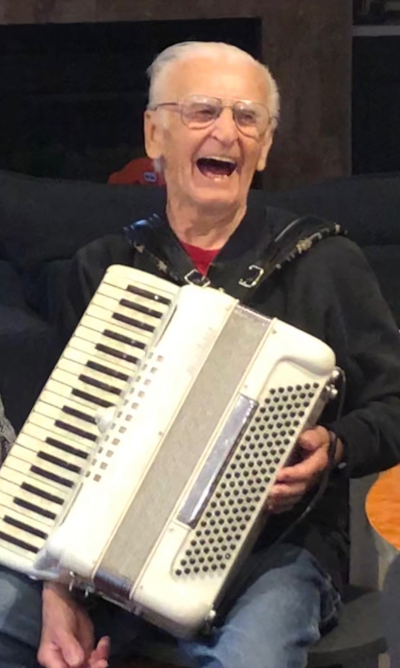 Julius Fabian, 87, passed away peacefully at his Kill Devil Hills, NC residence January 26, 2022. He was preceded in death by his loving wife of 50 years- Livia; his beloved parents, Sandor and Julianna Fabian; and his sister, Julia Magori.

Julius’ life was complex and challenging. After fighting in the Hungarian Revolution of 1956, he narrowly escaped persecution and ended up in an Austrian Refugee camp. It was there he met and fell in love with his future wife, Livia. The two were forced to separate and live in different countries. Two years later, they managed to reunite and marry in Montreal, Canada.

Eventually, the couple settled in Richmond, VA where they raised their family and prospered. Julius worked hard and became a successful small business owner. He discovered the Outer Banks in the 1960’s and retired here in 2009. Here, Julius became a popular “local”- windsurfing, playing his accordion at numerous beach venues; swimming and walking the beach, and living for his cherished grandchildren. Over the years, Julius also spent many, many hours with his “fellowship” who became family.

Julius is survived by his two devoted daughters, Teresa Fabian of Kill Devil Hills, and Victoria Galiffa (Chris) of Richmond; his five grandchildren, Gianna (Mickey), Frankie, Christopher, Maya, and Tessa; his grand-niece and nephew, Rita and Gabor; as well as his nephew Stephen Spaller and his sister-in-law Valeria Spaller of Hungary; The youngest member of his family his great-granddaughter, Livia Albornoz of Falls Church, VA was the light of his eyes. He left behind a host of many relatives and extended family members in Hungary and many loyal friends.

The children will honor their father’s request for cremation and their plans for a casual memorial gathering are currently pending. Details will be announced soon. Expressions of sympathy and comfort are welcome via the online register at gallopfuneralservices.com. Gallop Funeral Services, Inc. was entrusted with arrangements.

I loved your dad, he was honest and true!!

So sorry to hear of Mr Julian’s passing but it was good that he died surrounded by his family who he loved so much. We enjoyed listening to him play his accordion for everyone. RIP to a special man

Sorry to hear Julius passed, he was quite the guy.

Love this picture of Mr Fabian so much because it captures how I remember him most-full of joy with the best smile ever. Heaven has gained a great man but know he will be greatly missed by so many who love him. My sincere condolences to his family.

I will miss you very much for being such a true friend. The many memories of our times together will be with me and my family forever