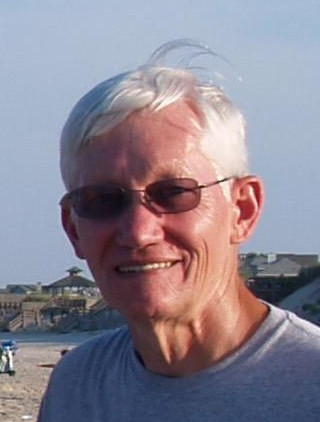 Nags Head – John George, III, known as Jake, died on May 1, 2018 at Currituck House in Moyock after a lengthy battle with frontotemporal dementia.  He was the husband of Dianne Sphar George for 41 wonderful years, living in Lover, PA until 2003, when they retired to Nags Head, NC.

Born on November 4, 1947, Jake was the son of the late Jack and Mina (McCrory) George.  He grew up in Canonsburg and Eighty Four, attended Canon McMillan High School, and graduated from the Village Academy in June 1967.  Jake attended the Massachusetts Institute of Technology for one year; then joined the Navy where served from 1968 to 1970.  In 1970, he received an honorary hardship discharge to return home to help with his father’s illness.

Jake worked at Canonsburg Pottery for several years, gearing up to take over the family business.  When the pottery company was sold, he worked at Franks Electronics, Coopers, the Volkswagen plant in New Stanton and Pennsylvania Transformer in Canonsburg. He graduated with honors from The Washington Institute of Technology in June 1990 with an associate degree in Electronics and Computer Technology.

When Jake and Dianne retired to Nags Head, Jake worked at the Outer Banks Hospital in the materials management department and moved to the facility maintenance department until 2012. Jake got his pilots license and loved to fly his Cessna 150 to visit his family and explore the coastline.  He was a black belt in Kung Fu and other styles of martial arts, was a member of the Outer Banks Repeater Club and loved his county, family, friends, and furry “kids”. He was also a member of Manteo Baptist Church.  Jake was a person that everyone could count on, and will be remembered for his humor, willingness to help, and his beautiful smile. Jake was preceded in death by his parents and sisters; Ann Malthouse and Lynne Simms.

The family would like to thank Currituck House for the love, care and support they gave to Jake and Dianne and also Community Home Care and Hospice.  Memorial contributions in Jake’s name may be made to The Friends Project that provides animal rescue in the Outer Banks, 703 W. Sportsman Dr., Kill Devil Hills, NC 27948 or Manteo Baptist Church, PO box 670, Manteo, NC 27954

A memorial celebration will be held later this year.

Expressions of sympathy are welcome at www.gallopfuneralservices.com.  Gallop Funeral Services, Inc. was entrusted with arrangements.