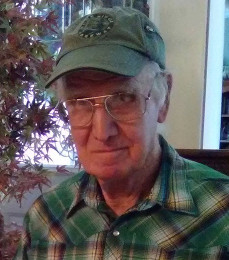 Moyock – James Elbrige Freeman passed away in hospice care at his residence in the Currituck House in Moyock, NC, on July 26, 2017, at the age of 98. James is predeceased by his parents, William Columbus (Dock) Freeman and Stella Franklin Freeman, his beloved wife Nell Freeman, and six siblings.

James was born at his home in Kalmia in Avery County, NC, on June 11, 1919. While in his teens, he joined President Roosevelt’s Civilian Conservation Corps (CCC) and helped build bridges and buildings in state parks across America. During this time, he was also employed through the CCC to join 1,500 other workers to plant beach grass and to build the timber-and-brush fences along the shoreline of the Outer Banks of NC. The fences were to help prevent the sands from blowing and to allow the dunes to form so that erosion would be curtailed.

At age 20, with the CCC jobs ending, he was eager to enlist in the military and continue serving his country, but because of his poor eyesight, he knew he would fail the eye test. So, he memorized the eye chart, passed the test and became a member of the regular Army in November of 1939. When his eyesight problem was discovered, however, Private Freeman’s service was terminated by an honorable discharge in July of 1940.

James married Nell Triplett November 23, 1940, in Mountain City, TN and then moved to Broadcreek Village in Norfolk, VA, to work in new home construction. In 1942, he was hired at the Norfolk Naval Air Station as an aircraft mechanic trainee.

Although he left school in the eighth grade to help support his family, he received many awards and accommodations for his inventions and innovations that improved aircraft safety and efficiency. He remained in civil service until his retirement in June of 1972.

That year he and his wife sold their Va. Beach home and moved to Sunny Acres in Nebo, NC. Wherever he lived, James would plant a flourishing flower and vegetable garden. He was known for his green thumb and for his ability to build and repair almost anything. Just before passing away, he told his grandson that the one thing he always wanted to accomplish but never did was to build an airplane from the ground up.

While living in Nebo, James was employed by McDowell High School as a groundskeeper. He was an active member of Nebo First Baptist Church and Outreach Baptist Church of Nebo, where he donated his collection of rocks gathered from 50 states to help in the construction of the church’s welcome sign.

They eventually retired and lived in Elizabeth City, where he was featured in the local newspaper because of the Christmas train display he built every year that covered half of the living room in their home. They lived here until moving into an assisted living facility in Chesapeake.

A memorial service will be held August 20, 2017, in Marion, NC. Since he was always eager to help someone in need, the family asks that, in lieu of flowers, a good deed be done in his memory. The family would also like to thank the caregivers at Currituck House and Community Homecare & Hospice for their faithfulness and friendliness when caring for Mr. Freeman; and Gallop Funeral Services for their very personal attention and care.