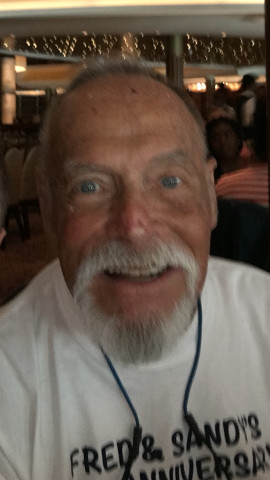 Born in Frederick, MD, June 11, 1934, he was the son of L. Ray Burgee and Mary Price Burgee. He was a graduate of Frederick High School and St. James Prep School, Hagerstown, MD. He also graduated from Western Maryland College and achieved a Master’s Degree equivalence.

As an athlete, he lettered in football, basketball and track at Frederick High School. At St. James, he lettered in 4 sports and was named the school’s most “Outstanding Athlete”. At Western Maryland in 1959, he was named “All American for Small Colleges”, “All Mason-Dixon Conference”, “All Middle Atlantic Conference” and “All American for Methodist Colleges”. Fred played right guard for the semi-pro Frederick Falcons football team (age 35-37) and was named “All League Right Guard” for 3 years in the Interstate Football League from1968-1970.

In 1988, he was inducted into the Frederick County Sports Hall of Fame, his plaque reading “All around athlete… a courageous competitor considered by many to be the most remarkable sports figure in county history”.

As a physical education teacher, he taught at Thomas Johnson High (1966-1969), Frederick MD, starting the first wrestling team in the county. He was assistant football coach for 2 years, and head JV football Coach with an undefeated season. At Frederick High School (1969-2000), he started the wrestling program, coaching numerous county, district and tournament champions. He coached varsity football from 1979-1981 as well as serving as tennis and softball coach, in addition to teaching Red Cross Swim instruction.

In addition to sports, Fred enjoyed singing bass in the church choir and was a member of the Frederick Chorale (an auditioned chorus) for over 30 years. Among highlights performing with the Frederick Chorale were a concert tour to Israel and Jordan and performances at the White House, Washington DC. Fred particularly enjoyed fishing on the Outer Banks, vegetable gardening and any activities involving the family including attending sports contests, dance recitals, school programs and relaxing at the beach.

Since retiring in North Carolina, he has been active as a Dare County Extension Master Gardner since 2002. He has been a member of Duck United Methodist Church. He especially enjoyed trips to Disney World and his Disney Collection. His favorite past-time has always been the time spent with his wife, who was the love of his life, his children, grandchildren, nephews and other family members.

Fred was predeceased by his brother Richard “Dick” Burgee of Frederick, MD.

A celebration of life will be conducted Thursday, March 2 at 2:00pm at Duck United Methodist Church, Duck, NC, with a reception to follow in the reception hall. Burial will be private for the family. Rev. Dr. John Tyson will officiate the service. In lieu of flowers, donations can be made to OBX Select Wrestling Club, c/o Kyle Briglia, 137 Waters Edge Dr., Kill Devil Hills, NC 27948.

In addition, a celebration of life will be conducted on March 18th at 3:00pm at Trinity United Methodist Church, Frederick, MD.

Gallop Funeral Services was entrusted with arrangements. Please express your condolences at www.gallopfuneralservices.com.