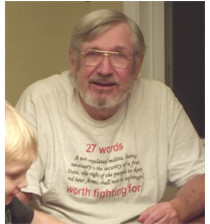 In addition to his parents, he was preceded in death by his brothers Eric and Bill Fiedler and his youngest son, Andrew (Andy) Fiedler.

Ned is survived by his love; his wife of 37 years, Beth (Lawlor) Fiedler of the Kill Devil Hills residence. Also surviving are his children Greg Fiedler (Deb) of Columbia Pennsylvania, Ellie Guthrie of Freeport, Illinois, Kate Zdanski (Stefan) of Fredericksburg, Virginia, Doug Fiedler (with whom he shared a birthday) of Kill Devil Hills and Maggie Graham (Carter) of Manteo, North Carolina. He was the adored and adoring grandfather of Eleanore (called Nonny), Katrina (called Kiki), Lutia, Conor, Olivia, Penny, Liam, Cora, Charlotte and Alexander, and always hoped for more grandchildren.  He will be affectionately remembered by Scott Guthrie, Sean Stayton, Sharon Ruckle Bryant plus countless friends and acquaintances. Finally, he will be sorely missed by his black lab, Bear.

Ned grew up in Lancaster Pennsylvania, along with his brothers Eric and Bill. With his former wife Linda Weidman, he had a son, Greg. Eventually, he moved out west to work and to attend the University of Wyoming in Laramie. There he met his future wife, Beth.

He was passionate about hiking, camping, hunting, fishing, back-packing, shooting sports and all manner of outdoor activities. Strongly influenced by his Grandpa Miles, fishing was something he enjoyed all of his life. Having visited the Outer Banks on a family vacation in the 1950s, he was thrilled to move here in 1998 and explore the fantastic fishing opportunities.

Known in the family for his original and awful puns, he was also an excellent cook, a student of history and science, a voracious reader, a contract bridge player, an artist, a self-taught mechanic, a fount of knowledge on many subjects. The personal motto he truly lived by was, “Anything Worth Doing Is Worth Over-doing.”

Above all, his greatest passion and treasure was his family.  Our dear ‘Old Grouch’ was our rock and his passing has left a huge hole in our lives. We’ll always miss his loud, opinionated, un-politically correct self.

The family will hold a private memorial at a date yet to be determined.
In lieu of flowers, donations in Ned’s memory may be made to: Currituck Animal Shelter or OBX SPCA.