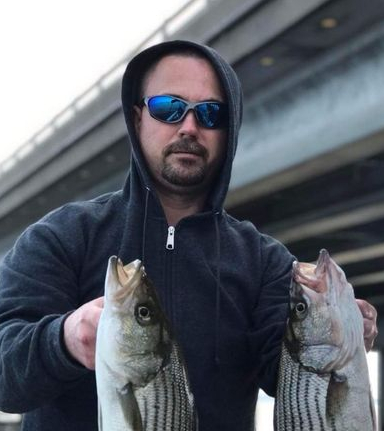 Manteo- Dusten William Abbott 40, of Manteo, NC, passed away suddenly January, Thursday 27, 2022. Dusten was born September 30, 1981 in Edenton, NC. He was the son of Ray Abbott, Sr. and Michelle Congleton.

Dusten had great love for being on the water. He grew up beach fishing with the whole family. Dusten’s love of fishing led him to become a commercial fisherman. He did everything from long lining to working on trawl boats. But most of all- he was always ready to go shrimping, which he enjoyed tremendously. Dusten had a heart of gold. He was always there to lend a helping hand to anyone in need who needed help. The love he had for his family and kids was far and wide.

The family will honor Dusten’s preference for cremation.  His memorial service will be held Sunday, February 6, 2022 at 3 pm at Roanoke Island Christian Fellowship. Pastor Aaron Burgess will officiate. Expressions of sympathy and comfort may be shared with the family via the online register at gallopfuneralservices.com.  Gallop Funeral Services, Inc. was entrusted with arrangements.

So sorry to hear about your loss. Love and prayers to the whole family

so sad to understand the passing of dw

So sorry for your loss Ray and Michelle(Ma) Love and prayers to you all!!

Sweet Dusten had a heart of gold ! God Bless this Family ❤🙏❤🙏 Aunt Doris

This is so sad.... I dont even have words. Keeping the family in our thoughts and prayers

So very sorry for your loss, prayers and God bless to all of you and may he rest in peace.

Ray..Michelle ..and family I know words cannot console you at this moment.Please know that Rick and I are so very sorry for your loss and praying for Peace for you all.

Praying for Peace for you all.Ray, Michelle and family I know words cannot console you right now.Rick and I are so very very sorry for your loss.

Dear Michelle, my deepest sympathy and blessings for you dear friend and your family. 🙏❤️. He'll be watching over you from heaven above always. Sincerely, Robin

It Aways hurts to lose someone we love, may GOD Bless and comfort the family during this difficult time. My deepest condolences and prayers

Our heart go out you and your family.God be you all.My prayers for strength and guidance at this time.

So sorry for you loss prayers for your family

Praying for my sister n Cliff and penny and rest of the family. Ean and Madison I’m so sorry for your loss of a father so young, I know you both will miss him. Hold on to your precious memories of him, he had a silly laugh and always leant a helping hand for a friend. If any of you need anything, please reach out and let me know. I love you guys and will be praying for you all…

We are very sorry for your loss. I know it is hard to say goodbye.

Dustin, RIP . Sending prayers for all the family at this time. May God give you peace and comfort with his grace .🙏❤🙏

Our prayers are with you and the family.

Ray and Family You all are in my thoughts and prayers. I have so many words but can't find how to say them, All my love sent to you all. I hope you feel a hug when You think of him. Justina

Ray. Michelle, Cliff, an family am so sorry for your lost! It’s so hard to find the words to say,even for someone in your shoes , but hugs to all , your in my heart and prayers,, Brenda Saunders Butler

Our most heartfelt condolences to the Abbott family on this tragic loss. Lee Family

Ray and family,my condolences for your loss.May time turn your grief into happy memories of your time shared with Dustin.Tommy

Ray and family I'm so sorry to hear of your loss. My God wrap his arms around you today and the days ahead. Your in my thoughts and prayers.

Michelle, you and your family are in my thoughts and prayers.

Penny & Family, I am so sorry to hear of your loss. Your love for your brother ran deep; hold tight to the happy memories you shared together. Praying for peace for you and the kids.

Ray, Michelle and Family, I'm so sorry for your loss. You are all in my thoughts and prayers.

Michelle, Ray and family. Caring thoughts to each of you. May the precious memories bring comfort to now and days ahead! God loves us all but there is something special about the fishermen. He is sheltered in arms of Lord! Celebrating with all the fishermen that have gone before him! Prayers

I'm so very sorry for your loss and heartache. I will keep you in my prayers. May God give you peace, and comfort during the difficult days ahead. Your neighbor at 186 The Dogwoods Lisa Barco