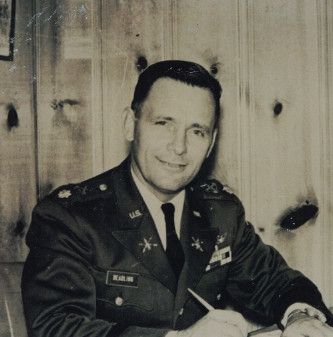 Bill retired to Colington Harbour in 1973. He founded Colington Harbour Builders, constructing houses and bulkheads. He is however, best known as the founder and developer of the Outer Banks Gun Club.  He served as its president for 20 years, Bill was also a state instructor for the concealed carry course and was awarded the Meritorious Service Award by Dare County in 2008 for his efforts in giving Dare County a local shooting facility. Col. Beadling was past president of the Colington Harbour Colington Association, past commander of the Coast Guard Auxillary1607, a member of the American Legion and the North South Skirmish Association.

At the age of 17, Bill joined the National Guard of Pennsylvania and rose to the rank of Colonel.  He was a pilot in WW II after which he commanded the missile defense of Pittsburgh.

This was my great grandfather and he was the most interesting and amazing man i have yet to see. I aspire to be half the man that he was. I miss his stories and his laugh so much. I didn’t get to see him in my later years. If anyone in my family sees this, please reach out. I’d love some sort of memorabilia to remember him but I’ve lost contact with my family because I don’t have social media