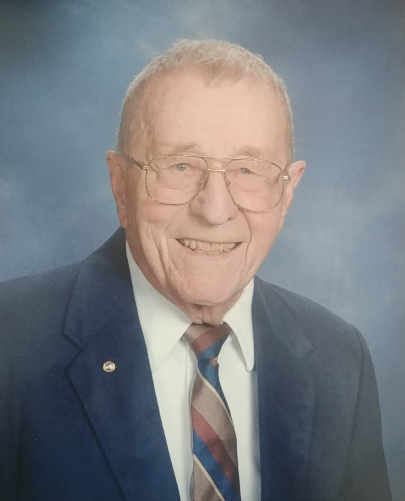 He was born on December 7, 1924 in Rock Island, Illinois, the son of Arthur B Sheets Sr and Gertrude Johnson Sheets, and he lived most of his life there. He married Elizabeth (Betty) Stone in 1944. She preceded him in death in 2006, as did his brother Dennis R Sheets, of Miami, FL.  Bud is survived by two daughters, Nancy L Darr, Nags Head, NC, and Cari L Sheets of Macomb, IL. Also surviving are two grandsons, Charles V Darr IV of Geneva, Switzerland, and Thomas C Darr of Virginia Beach, VA; a great-grandson, Trevor P Darr, Virginia Beach, VA; and two nephews, Eric Sheets of Ecuador; and Manfred Sheets of Miami, FL.

After graduating from Rock Island High School, he entered a special Navy College Training Program, where he was educated at Augustana College, Notre Dame, and Harvard. During this time, he married Betty Stone, his high school sweetheart.  After his Navy assignments, he and Betty moved back to Rock Island, where both were employed at the First National Bank of Rock Island. In 1951, he was called up from the Navy reserves to active duty in Norfolk, VA. Following his Navy obligations, Bud, Betty, and their two daughters returned to Rock Island. Both Bud and Betty returned to work at the First National Bank, where Bud was employed as a Trust Officer, until his retirement in 1989.

Bud’s greatest passions in life were golfing and making people laugh. He never met a joke he did not try to repeat at least ten times. His interest in golf began at the age of 13 as a caddie in Rock Island, and he began golfing soon thereafter. During his later years, his home was located on the Nags Head NC Golf Links, and he played golf there until he was 90 1/2 years old. His retirement goal was to play golf in all 50 states. He achieved his goal of golfing in all 50 states in Anchorage, AK in 1997, where he celebrated with family and friends. He and his wife Betty had numerous memorable experiences traveling the states during those years.  In fact, Bud enjoyed sharing his golfing stories with anyone who wanted to listen. He loved to say, “Betty drove the golf cart while I drove the ball.”

There will be a service honoring Bud at the Gallop Funeral Service Chapel at 1:00pm on Sunday, November 17, 2019 at 6917 S Croaton Hwy, Nags Head (phone 252-449-8695). That service will be followed by the celebration of Bud’s life at the Nags Head Golf Links Club House at 5615 S Seachase Drive, Nags Head, NC (approximately Mile Post 15 on the Roanoke Sound).

Memorial contributions may be made in Bud Sheets’ name to Dare County Home Health and Hospice, 109 Exeter Street, Manteo, NC  27954; phone 252-475-5028. Condolences to the family may be expressed via the online register at www.gallopfuneralservcies.com.  Gallop funeral Services, Inc was entrusted with arrangements.