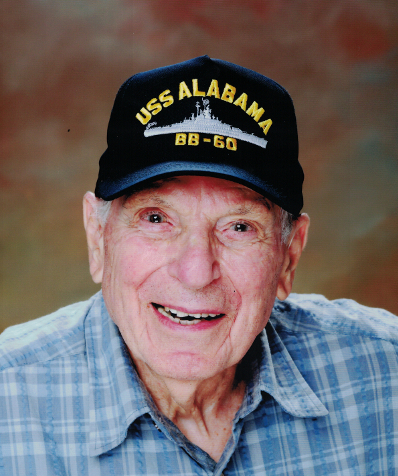 Nags Head – Albert went to his heavenly home on July 26, 2017.  He was born March 1, 1924 in Halethorpe, Maryland to the late George Henry Grimm and Clara Elizabeth Griffin.  Along with his parents, Albert was predeceased by his five brothers Emil, George, Frank, James, and Edward, and his sister, Mary.

Albert is survived by his wife, Shirley of 65 years and three children; Susan Saulsbury and husband Mark, Alicia Wingate and husband Douglas, and William Grimm and wife Simin. He is also survived by three grandchildren; Alison Lawhorne and husband Jeremy, Jonathan Wingate, and Cara Wingate.

Albert was a proud World War II veteran, serving in the Navy aboard the USS Alabama.  He was a plank owner, an original crew member, of the ship.  He was a graduate of the University of Baltimore, a Boy Scout executive, a Housing Authority manager, and a medical administrator for the State of Maryland.  Albert’s service for others included scout leader, church elder, and social services volunteer. Albert was a dedicated Outer Banks Presbyterian Church member who served on numerous committees and operated the church sound system for many years.

Albert’s motto was “My work is not my life. My life is my work.”  Most of all, God gave his family the best husband, father, and grandfather they could have. Friends and family will forever cherish his quick wit, adventurous nature, and loving spirit.

A memorial service to celebrate Albert’s life will be held at the Outer Banks Presbyterian Church in Kill Devil Hills, NC on Thursday August 10, 2017 at 2 pm.